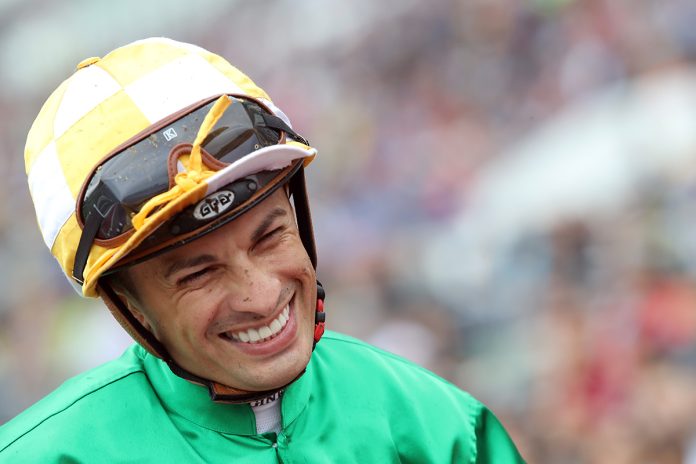 De Sousa is booked by trainer Stephen Crutchley on Fame Star, while Moor, who is at his third flying visit to Singapore this year, will ride the James Peters-trained Grand Koonta in the 1,200m sprint feature next Sunday.

Moor did not win on Hero in the Group 2 Stewards’ Cup nor the Group 1 Singapore Derby at his last two visits this year, but he bagged two winners on the undercards. Licensed by Racing Victoria, he currently sits in 14th position on 20 winners on the Victorian Metropolitan Jockeys’ Premiership this season.

De Sousa, who will be at his second stint in Singapore, rode once at Kranji in the Singapore Airlines International Cup in May 2013 when the Godolphin Stable-owned and Saeed bin Suroor-trained Hunter’s Light ran sixth behind Hong Kong’s winner Military Attack.

A short write-up of de Sousa is as follows:

The 41-year-old de Souza was born in Sao Francisco do Maranhao, Brazil. He enrolled into the Sao Paulo Apprentice School after meeting the late Brazilian jockey, Fausto Durso. De Sousa made his riding debut in 1997 and was crowned champion apprentice jockey in his native country three years later.

He first moved to Europe to work for Ireland trainer Dermot Weld at 22 years old, and then to England two years later to team up with North Yorkshire trainer Dandy Nicholls. De Sousa’s first win in Britain came aboard Sonic Anthem on New Year’s Day in 2006 and he has since gone on to become a world-renowned rider.

Now a three-time British champion jockey and once retained rider for the prominent King Power Racing and Godolphin Racing, de Sousa has claimed 12 Group 1 wins thus far, with his first Group 1 win aboard the aforementioned Hunter’s Light at the Premio Roma GBI Racing in Italy in 2012.

Other notable Group 1 achievements of his include last year’s Nunthorpe Stakes atop Winter Power, the 2019 QIPCO British Champions Sprint Stakes aboard Donjuan Triumphant, the 2018 Longines Hong Kong Cup with Glorious Forever, the 2014 Dubai World Cup with African Story, the 2013 Champion Stakes with Farhh and the 2013 Dubai Turf with Sajjhaa.

The British national also snared the 2018 International Jockeys’ Championship in Hong Kong, a place he rode with success over three stints from 2015 to 2019.

Licensed by the British Horse Racing Authority, de Sousa currently ranks 34th on 24 winners on the British Flat Jockeys championship this season. He has been riding in races for 25 years and has clocked in more than 2,000 winners all over the world.