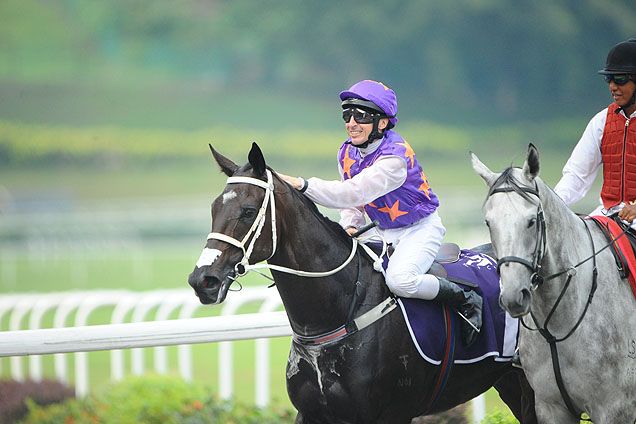 Old warhorse War Affair has waged his last battle on the tracks. The 2014 Singapore Horse Of The Year has been retired to Malaysia at the ripe old age of 10.

Despite his well-documented health issues, mainly of respiratory nature, the son of the late stallion O’Reilly has enjoyed a long and successful career at Kranji spanning over eight seasons, kicking off the first as a juvenile champion in 2013.

Whilst War Affair has not visited the winner’s enclosure for more than three years, he was still going around in good shape, occasionally putting up cheeky runs against his younger rivals. He ran his farewell race on September 5 when he beat two home in a Class 2 race.

It turned out that he didn’t pull up without anything amiss from that 1400m race, which was ringing up his 43rd career start, including two in New Zealand. The injury was not career-ending, but trainer Jason Ong and the Ong family felt the moment was right to call time on their valiant servant’s glittering career.

On October 30, War Affair was sent to a riding club in Ipoh where he would see out his remaining years, a change from the original plan to ship him back to his place of birth in New Zealand, the Trelawney Stud.

“He suffered a hind fetlock injury after his last race. That’s when we decided to put a stop to his racing career,” said Ong.

“Even though he was not young anymore, he was still enjoying his racing. But with that latest injury, which luckily only needs rest, we felt it was time he went for a well-deserved retirement.

“That’s it, no more racing for War Affair. The family has decided to retire him in Malaysia and not New Zealand in the end, as it’s easier for us to visit him when he’s across the border.

“It’s a riding centre in Ipoh which is already home to some former racehorses there. He’ll have a nice paddock to run around.”

War Affair bows out the winner of 16 races in 43 starts, 10 of which came in ‘black type’ events, including five at Group 1 level for stakes money in excess of $3.1 million for the Warplan Racing Stable of Mr Ong Boon Hin.

The Group 1 highlights came (in chronological order) in the Singapore Guineas, Panasonic Kranji Mile and Raffles Cup in 2014 when he also won the Singapore Horse of the Year gong and champion three-year-old title, followed the next year by the Lion City Cup and Patron’s Bowl and champion four-year-old title, all under the care of trainer Alwin Tan (he was originally prepared at his first season as a two-year-old and three-year-old by Mark Walker, scoring six wins for the Kiwi champion trainer).

He was then transferred to ex-Kranji trainer Bruce Marsh in 2016, scoring twice for the Kiwi horseman, including his last win, a dead-heat with Storm Troops in the Group 3 Saas Fee Stakes on May 14, 2017.

With his wind issues hampering his career, a few months later, Marsh sent him to New Zealand where he even tried his luck at the races under Marsh’s son Stephen’s care in 2018, albeit without success. As a measure of the depth of the opposition he was up against, the winners were New Zealand champions Melody Belle and Te Akau Shark.

A fully recovered War Affair returned to Singapore for two more seasons, but his ageing legs found it increasingly harder to compete at the highest level until that September swansong.

“War Affair has done so much for us and Singapore racing, he owes us nothing. He’s done us proud and has put us on the map with his achievements,” said Ong.