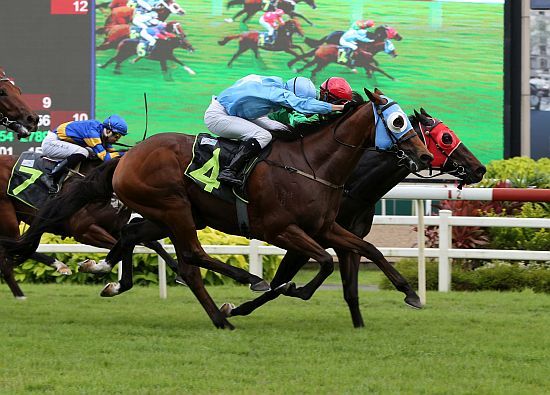 The money looked cold for $7 hotpot On Line at the furlong pole, but under top gun Vlad Duric’s peerless power in the saddle, a desperate lunge at the post got the skinny payout through by the slenderest of margins.

The three-time Singapore champion jockey certainly deserved full marks for the win. Not only his ruthless wielding of the whip had a big say, but that clock in his head was again impeccably right in telling him when to get busy on the O’Reilly four-year-old.

A well-timed midrace move to come across heels and commence a sustained run three wide turned out to be the lifesaver.

Upfront, as soon as early leaders Runfinnrun (John Sundradas) and Resolution (Wong Chin Chuen) had bowed out, Gentlemen Agreement (Matthew Kellady) stormed to the lead with a bold dash and was being hailed the winner.

On Line was still in contention on the outside, but was not quite making headway and cutting back the margin as would have been expected.

Any suggestion the bay had peaked on his run was, however, stubbed out when the big bounds finally appeared as the winning post loomed.

Urged on under Duric’s customary rage to win, On Line dug deep to just touch Gentlemen Agreement out by a nose. The latter’s stablemate Global Kid (John Powell) put in his best run to-date at his first outing as a gelding, with an eye-catching third another 1 ¼ lengths away.

On Line stopped the clock at 1min 22.53secs for the spin around the 1400m journey on the Long Course.

“He’s a quality horse who will have so much more to offer when he gets a bit of ground,” said the Zimbabwean-born handler.

“He’s a horse with a bright future and on his pedigree, he definitely will go further. I will step him up to 1600m next time.

“And then, provided things work out in terms of his points, we can skip the first Leg of the Singapore Four-Year-Old Challenge (Group 3 Silver Bowl over 1400m on February 29) and look at the second Leg (Group 2 Stewards’ Cup over the mile on March 20) instead.”

Clements did not return empty-handed from his recent visit to the Magic Millions Yearling Sale on the Gold Coast, even if the market has been as strong as ever.

“It was a really solid sale with very strong quality all round. It’s really tough buying there,” he said.

“There are a lot of two-year-old types on the market, which seems to be the way to go.

“I myself bought one from a relatively new sire called Star Turn. He is a nice American-bred with a nice pedigree.”

While Duric had to earn every cent of his riding fee to gain the win, the reward was a consolidation of his driving seat in the Singapore jockeys’ premiership with a riding double (he scored aboard Rise Of Empire earlier) to bring his 2020 tally to six winners, three clear of a chasing pack headed by John Powell, Marc Lerner and Duric’s runner-up at his third title-winning campaign in 2019, Benny Woodworth.

“Obviously it was very tight, but I thought I got there to be honest,” said the Australian when probed on his confidence about earning the verdict with On Line.

“My horse was attacking the line very well and I was confident he would get there, even if I was as nervous as everybody else with a furlong to go.

“This horse is looking for the mile. I actually had to niggle at him to keep in touch with the rest.

“That’s why I popped him off the fence to come out three wide just to keep his momentum going, keep him rolling.”

On Line has now taken his handy record to three wins and three seconds from seven starts for prizemoney which has reached around the $135,000 mark for the 2019 Singapore champion owner, Thai outfit, the Falcon Racing No 7 Stable.

While disappointed the odds-on favourite found luck close home to deny him of a stable quinella, trainer Shane Baertschiger was still extremely happy with the results.