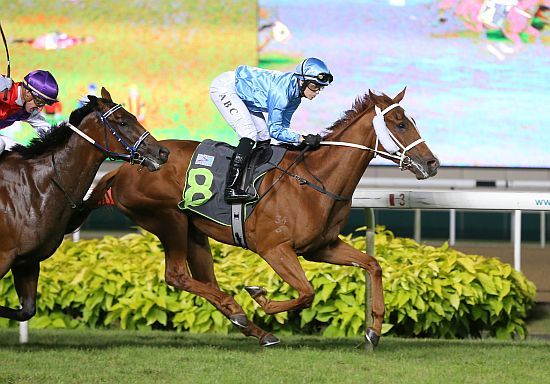 via Michael Lee, Singapore Turf Club
23/08/2019
Michael Clements’ joke that the reason Iron Ruler’s head is cocked to one side is because “he is looking for the photographer” turned out to be more than just wishful thinking on Friday night.

As observed at his first two Kranji starts when second and third in Restricted Maiden company, the talented but rough-hewn son of Dissident likes to turn his head sideways when he races, a tendency which Mr Krit Chisatteni, the principal owner of Falcon Racing No 7 Stable, queried Clements about.

The Zimbabwean-born handler did not deny it wasn’t a hindrance, but also played it down as immature racing mannerism, and to inject a bit of light banter, cracked the “where’s the camera” joke.

Aided by a 10-out-of-10 ride from Kiwi jockey Alysha Collett, Iron Ruler certainly shot right smack into the shutterbugs’ frame at the business end of the $75,000 Restricted Maiden race over 1400m.

Taking a sit outside the leader Household Dynasty (Ng Choon Kiat) after a smart getaway, Iron Ruler was always travelling like a winner, an impression which was franked further when Collett sooled him forward at the 300m.

While still green and looking all at sea when he struck the front, Iron Ruler knuckled down to the task under Collett’s coaxing to go and score in advance of Smoke And Mirrors (Daniel Moor) by half-a-length with Achieved More (Benny Woodworth) third another half-a-length away. The winning time was 1min 23.31secs for the 1400m on the Long Course.

“He’s had more race experience after two runs. He was trapped wide at these first two runs, while he is a horse who likes to get to the rails,” said Clements.

“He was beaten by two pretty smart types (Bluestone and Mr Malek). It was a good effort to win tonight even if he needs more time to mature.

“He is like a two-year-old in a four-year-old body, but he will get put together with time. The owner asked me why he has his head to one side, I told him he is looking for the photographer!

“I think he’ll be better as a three-year-old and over more ground. He’s going for a break after tonight’s win.

“Alysha did a good job on him, too. She fell off one Falcon horse (Drone) in that accident 10 months ago, so it was a good result for her to win (on another Falcon horse).”

Collett had to cut short her first Singapore stint last year after she sustained back injuries from that fall, but has made a successful Kranji comeback, having now booted home her third winner this time in.

“He’s still a raw horse,” she said of Iron Ruler who was ridden by Vlad Duric and Daniel Moor at the gelding’s first two starts, by coincidence the two jockeys who were charged of careless riding in Collett’s fall.

“He had no idea what he was doing out there, but he showed a lot of fight.”

Iron Ruler has now racked up around $60,000 in prizemoney for Thai outfit Falcon Racing No 7 Stable from his record of one win, one second and one third from three starts.