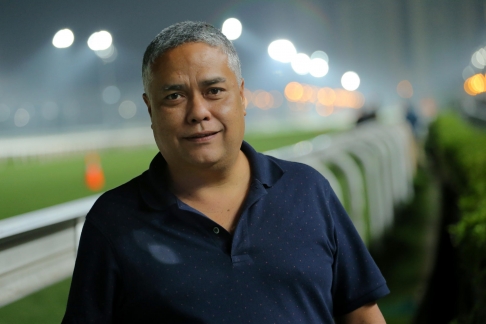 via Singapore Turf Club
14/08/2019
The Stewards concluded their Inquiry in relation to this matter on Thursday, 04 July 2019 where further evidence was taken from Trainer J O’Hara (pictured) and expert witnesses, Dr Koos VD Berg, Head of Veterinary and Dr Shawn Stanley, Head of STC Laboratory.

It was established that after averaging the two readings taken from the Pre-Race Blood Sample resulted in an average TCO2 level of 35.7 millimoles per litre in plasma. Based on the expert evidence heard at the Inquiry including the history of TCO2 Samples taken Pre-Race and Out of Competition and two Samples taken under twenty-four hour security supervision from KRATOS, the Stewards were of the opinion on the balance of probabilities, KRATOS had been treated with some form of alkalinising agent within one Clear Day of the race in which it was presented to race at Singapore Turf Club on Friday, 31 May 2019.

Trainer J O’Hara was found guilty of a charge under the provisions of MRA Rule 134(14)(a) which reads,

‘A person shall not administer an alkalinising agent, in any manner, to a horse which is declared to run in any race for a period of one Clear Day prior to the day of the Race Meeting.’

Trainer J O’Hara was fined a sum of S$5,000 and was advised of his Right of Appeal.

On Friday, 05 July 2019, Trainer J O’Hara exercised his Right of Appeal against the decision of the Panel of Stewards and the penalty imposed on him.

The Appeal Panel’s Hearing of the Appeal was concluded on Wednesday, 14 August 2019.

After considering all of the evidence together with submissions from Trainer J O’Hara and the Chief Stipendiary Steward, the Appeal Panel dismissed the Appeal against the decision of the Panel of Stewards with regards to the charge. However, the penalty was varied to a warning. His deposit was refunded.

Ironclad to make amends in KL