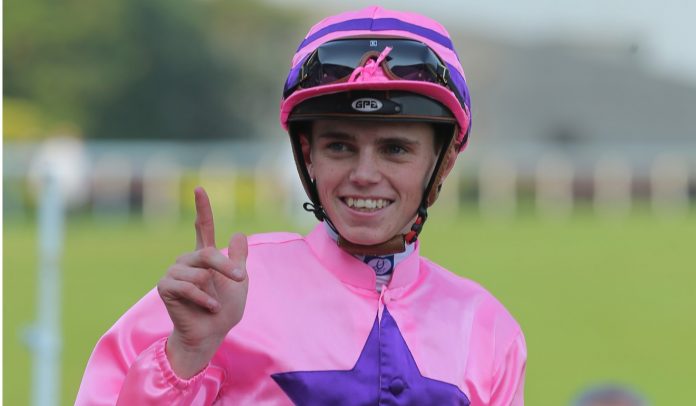 via Michael Lee, Singapore Turf Club
14/08/2019
Young jockey Callan Murray has cut short his Singapore stint and is returning to his native South Africa to continue his riding career.

Licensed until the end of the year, the tall rider, who turns 22 next Saturday week, decided to pull the pin for a combination of personal reasons and “better opportunities” waiting for him back home.

After kicking off in February (he rode his first winner Ganassi on March 3), Murray rode at his last meeting on Sunday, coming up with a third place aboard Shangani as his best result from six rides, to bring up a final tally of five wins and 22 placings from 159 rides. He is 18th on the log.

Before the former South African champion apprentice jockey (2015-2016) moved to Kranji, he had two short stints in Hong Kong, with mixed results. He won two Group 3 races in Hong Kong from a decent haul of four winners at the first one in 2017, before returning for a longer term the next season but rode only two winners.

Murray did not win any feature races at Kranji, but did take home the second Leg of the Singapore Golden Horseshoe series, the Thoroughbred Breeders Australia Centenary Stakes with Ricardo Le Grange’s smart juvenile (now three) Rocket Star on June 9.

Besides, Murray ranks that win – which was incidentally his farewell win – as his most memorable moment Kranji.

Callan Murray (with cap at the back) was a guest speaker at an apprentice jockeys workshop on March 21.

“Rocket Star’s win in one of the Legs of the two-year-old series was the highlight of my stay in Singapore,” said Murray who flew out of Singapore on Wednesday.

“I have also grown a lot in my time here. I’ve made some new contacts and new friends.

“There were better opportunities at home at this stage, and I had to unfortunately leave as soon as possible as the South African season has already just started.

“I’m going back to my hometown and former base Johannesburg. I’m already booked to ride at Turffontein this Saturday.

“I would like to thank the Singapore Turf Club for the fantastic opportunity they have given me and I really hope that by doing this I will be able to tailor myself to be a better candidate to return with more success in the future.”