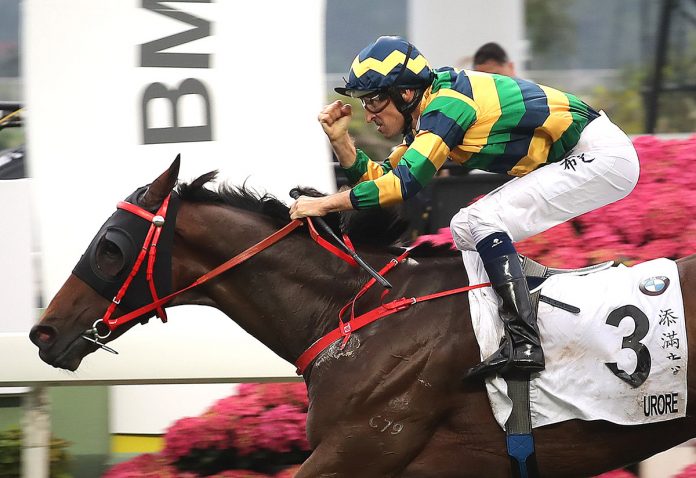 “I can’t express my feelings,” the handler said, after claiming Hong Kong’s most prestigious local prize in only his second season with a trainers’ licence.

Lor, 53, whose father was a mafoo, grew up in Happy Valley, Hong Kong racing’s spiritual home. After 36 years advancing through the Hong Kong Jockey Club system as jockey, assistant and now trainer, he has an acute sense of what the 146-year-old feature means to the city’s racing folk.

“To have one horse to even run in the Derby – now I’ve won the Derby, so it’s a dream come true!” he said.

Tony Cruz was the last “local” trainer to win the race prior to this afternoon. He achieved that victory with Helene Mascot and Lor’s Furore emulated that horse in winning the Derby after first claiming the opening leg of the Four-Year-Old Classic Series, the Hong Kong Classic Mile, but failing in the Hong Kong Classic Cup between times.

Lor has made a rapid advance to the top tier of Hong Kong’s training ranks, and in fact saddled three of the blue riband’s four top-rated gallopers. But his Derby breakthrough came in no small part as a result of an astute ride from one of the world’s great exponents of jockeyship.

Hugh Bowman charted Furore’s path from a wide starting point in Gate 12; rolling his mount forward and slotting neatly into a handy berth one spot off the rail, all before the field of 14 had made it through the first turn.

“Although Furore drew poorly, I was confident he could do the job if I could get him in the right position,” the Australian ace said. “I had the stablemate (Mission Tycoon), the likely leader, drawn next to me (11); I thought I could at least go with him to start with and see where we end up. I was able to get a lovely run three pairs back.”

That proved to be the perfect position for the G1-placed Australian import as Ka Ying Star and Mission Tycoon shared the lead in pedestrian style. That tempo seemed to foil the chances of 1.9 favourite Waikuku, taken back from Gate 14 to sit second last under Joao Moreira.

John Size’s rapid improver was fully 11 lengths off the lead down the back straight and when Moreira asked for progress approaching the 1000m point, the Irish import was slow to respond.

Zac Purton, meanwhile, decided his chances on the stamina-laden Lor runner Dark Dream were being compromised.

“I was pleased when Zac pressed on with Dark Dream,” Bowman said. “It just gave me the option to get on his back, and he was one of the main dangers. He gave me a dream cart into the race and my horse was able to get the job done as he did over the mile two starts ago.”

Bowman slipstreamed Purton into the home straight, shifted out, and, with 300m to race, asked for a change of gear. Furore quickened to the lead as the two front-runners wilted and Dark Dream boxed one-paced.

The victor galloped on strongly, stopping the clock at 2m 01.30s. It was Bowman’s second Hong Kong Derby triumph, three years after he partnered Werther.

Waikuku did produce a crowd-raising late challenge, though. The Harbour Watch gelding came to life on the turn for home as he discovered a rhythm, entering the straight with momentum flowing but a steep task to surmount.

The Size-trained galloper charged the final 400m in a race fastest sectional of 22.33s. The effort was brave, it was brilliant – it was not enough.

“An amazing run,” Moreira called it. “He has been beaten by a very good horse who delivered his very best race today.”

Fans had feared for Waikuku’s participation after it was disclosed that he had a sore foot last Sunday.

“My horse, as we all know, had some little issues eight days ago and the way he ran today to overcome that, we should be very proud of his performance. He’s a horse I have a lot of faith in and I can’t wait to ride him next time,” the Brazilian added.

The John Moore-trained Sunny Speed also closed off strongly, missing second by a short-head at odds of 86/1. The British import has made remarkable progress since stepping off the plane as recently as November and was having only his third Hong Kong race.

“He got a lovely run through,” jockey Neil Callan said. “When I loomed up 250 metres out I thought he was going to run past the winner. Coming in off just two runs like that it was a massive run and John and his team have done a great job just to get him here. In that context, he’s got a big future.”

Jockey Derek Leung said: “He ran well but 2000 metres is a bit too far for him.”

Lor will now point Furore towards FWD Champions Day at Sha Tin on 28 April, with the FWD QEII Cup at the course and distance the likely option, although the handler is going to cover his bases.

“I think I will enter for the QEII Cup because there’s plenty of time to that race next month,” he said, “but I will probably enter for the Champions Mile as well and then decide later.”

Bowman is looking forward to climbing back aboard Hong Kong’s newest star when Champions Day comes around.

“I think back to when Werther won the Derby a few years ago and he went on to win the QEII at his next start,” he said.

“I don’t know what Frankie’s plans are but you’d think it would be a logical step forward. Until he goes there and does it, it’s hard to know (if he’s good enough). He’s certainly put the writing on the wall that he deserves his chance in open grade.”