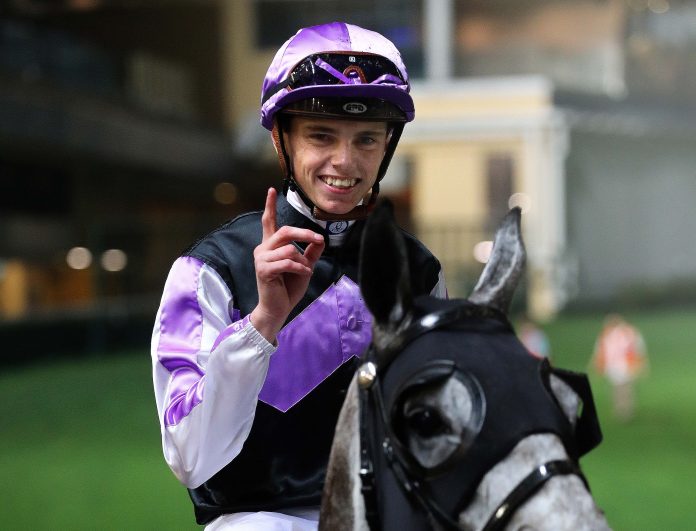 Young Callan Murray’s rise to the top of the racing world has been nothing short of meteoric, but it was ironically a sudden and most unexpected slump that has made him a “better person”.

The South African whizz kid was so used to success and adulation in the last six years he has plied his trade as a jockey that he was totally blindsided by a dry spell not many, including him, would have predicted would befall him in Hong Kong in the current racing season.

After his Midas touch again came to the fore at a three-month trial stint in the Asian racing mecca at the end of the 2016-17 season, resulting into two Group Three victories among his four wins – the Group 3 Sha Tin Vase with 89-1 Lucky Year and the Group 3 Premier Plate with Horse Of Fortune – he went back to the former British colony for more this season.

The contrast between the two stints were like night and day. Only two winners have come his way since he began his six-month contract in August 2018.

For the first time, the word “battler” could have found its way into a feted career that had thus far been devoid of any major kinks.

Callan Murray was just a name who could do no wrong back home.

For someone who was keener on motocross (since he was three) as a kid growing up in South Africa, Murray has switched to the different horse power underneath like a duck to water.

Put on the jockey career trail by a family friend who was a racing steward, Murray was crowned South African champion apprentice jockey at only his second season in 2015-2016. The racing headlines then just rolled by, one after another, first Grade 1 win in the SA Classic aboard Heavenly Blue for top trainer Mike de Kock in April, 2017, followed one month later by three individual Grade 1 winners at the Champions Day race meeting at Turffontein on May 6, 2017, namely Deo Juvente in the Premier’s Champions Challenge, Rafeef in the Computaform Sprint and Mustaaqeem in the SA Nursery.

Even when he exported his talent overseas for the first time, he struck paydirt. He rode four winners during a six-week stint with leading Melbourne trainer David Hayes in Australia in 2017.

However, the Hong Kong horror run almost makes him human after all. His armour does have a chink or two.

But that thudding fall back to Earth has also jolted Murray’s defence mechanism into finding a way out. The neighbouring neon lights of Singapore have never looked more beckoning, and so it is the Lion City, four hours away from Hong Kong, that Murray has picked as his island of redemption.

Shortly after arriving in Singapore on Tuesday, the 370-race winner was a busy bee at Kranji trackwork in the next two days. Making his presence felt seems to have paid instant dividends as he will commence his new Singapore adventure with eight rides this weekend, split both ways between Friday and Sunday, for six different trainers.

It’s a great start, but Murray knows only too well big books of rides don’t count towards healthy spots on the premiership – and bank accounts. Though only 22, Murray, who does not hail from a racing family, is candidly frank and open about the reality of keeping heads above water in racing.

“It didn’t work out in Hong Kong. It was a difficult time for me,” he said.

“First I broke my nose and then I got suspended. It just went a bit ugly, but I was riding 100-1 chances every week.

“There was nothing I could do to make them win, but it was without a doubt, still a good learning experience.

“It was the first time I was facing a drop. It made me a better person, in a way it has brought me back down to Earth.

“It was not a good time to go back home, though. I still wanted to explore other countries and Singapore was a good option.

“Don’t get me wrong, South Africa still has great racing, but the prizemoney is better here. It’s not always about the money, but I’m also a realist.

“Obviously, I’ve never ridden in Singapore, and you don’t know if you will get support, but I’ve met Ricardo Le Grange in South Africa, and I’m happy to give it a go.

“I would like to thank the Singapore Turf Club Chief Steward, Mr Terry Bailey and the chief starter Damien Kinninmont for their help in getting me here.”

Like any new jockey, Murray is trying to get his head wrapped around the new jurisdiction and its own set of parameters as quickly as possible.

“In some ways, Singapore is quite similar to Hong Kong, but I’ve learned during my time there you need to understand the system,” said Murray.

“I have to work hard and show my name out there. The last seven months have been tough, but I have the confidence I will be successful here.”