Former Australian Group 3 winner Charge finally got on the board at his third Kranji start on Saturday.

Renamed as Aramani by the same outfit behind other top Australian imports for trainer Shane Baertschiger like Lion City Cup winner Aramco and recent Kranji Mile winner Aramaayo, the Zoustar five-year-old finally reproduced his Sydney/Melbourne form with an all-the-way win in the $70,000 Class 3 Division 2 race over 1200m.

Showing his customary early gate speed – at his first two Kranji runs, he led but overraced and petered out to run eighth on both occasions – Aramani (Ruan Maia) was never in doubt this time.

A touch of keenness was still noticeable, but Maia was able to curb his enthusiasm quite well. When they turned for the judge, it was obvious no petrol had been spent unnecessarily, and he would not be caught this time.

Favourite Master Ryker (Hakim Kamaruddin), Legend Of The Sun (Benny Woodworth) and Watch Out Boss (A’Isisuhairi Kasim), who were the trio who stayed in touch with Aramani’s relentless gallop throughout, tried to whittle down the margin, but the former Chris Waller galloper never wilted.

Aramani scored by 1 ¾ lengths from Watch Out Boss with Legend Of The Sun in third place another 2 ¾ lengths away. Master Ryker had to settle for fourth place another half-length away. The winning time was 1min 9.63secs for the 1200m on the Long Course.

Baertschiger said he had always seen that raw ability in his new charge, but because he was such a hothead on the training tracks, it had never really got a chance to be showcased until Saturday.

“He’s a very difficult horse to train. In Australia, he won two races but he also had 14 gear changes,” said the Australian trainer.

“He’s uncontrollable in trackwork, he’s a mad bolter. Matthew Kellady is the only one who can ride him whether it’s slow work or fast work.

“Today, he pulled a little again, but I told Maia not to fight him, just let him stride, and it’s paid off. I think he also liked the give in the track.

“We’ll see how it goes, but I may run him in the Lion City Cup.”

It was recently announced that the Group 1 Lion City Cup (1200m), which was postponed from its original May date due to COVID-19, will be run on October 25.

Maia was bringing up a riding treble after saluting earlier on two short-priced favourites, Moon Face ($7) for Cliff Brown and Blue Blood ($6), a newcomer prepared by Baertschiger as well, but also raced in the same connections as Aramani.

A noted keeper of statistics, Baertschiger didn’t fail to highlight the rich vein of fortune Maia has struck with the Aramco Stable and their associates.

“This is the fourth horse Maia has won for the Aramco group. The first one was Aramaayo in the Kranji Mile, then he won on King’s Command, Blue Blood and now, Aramani,” said Baertschiger.

“The only blemish was when Aramaayo ran fifth in the Derby last week, but it’s been a great run for them.”

A two-time winner including the Group 3 Red Anchor Stakes (1200m) at Moonee Valley in October 2018, Aramani amassed close to A$220,000 in stakes earnings for their previous owner, the Qatar Bloodstock.

With that first Kranji win under the belt, Aramani has picked up his first local cheque, amounting to around $40,000 for the Aramco Stable. 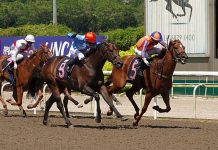 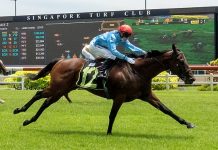 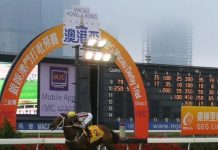