The Australian trainer has not led in that second winner yet, but has come close three times from only six subsequent runners with one second, two thirds and one fourth.

Elite Conquest (fourth) and Elite Silverghost (third) are two from his small team of 15 who have been knocking on the door for that second fillip. The pair will make up his only squad at this Friday’s standalone meeting.

A 100% strike rate would be nice, of course, but Fitzsimmons is only hoping they can both frank their last encouraging displays with another forward run.

The step-up to the mile for both gallopers is one major plus point in their favour, especially for Elite Silverghost in the $50,000 Class 4 race, he said.

The Argentinian-bred five-year-old by Mutakkdim (formerly raced as Agreement) did not set Kranji on fire at his first few outings last year, but was a different proposition this year. At his first 2020 outing, he ran a closing sixth under Marc Lerner in a Class 4 race over 1400m, before following up with a fast-finishing third under Daniel Moor, just over a length off Water Rocket when back in trip over 1200m in another Class 4 race.

“He’s been working really well and he has come on from that last run. The drop from 1400m to 1200m and now back up to a mile is no drama, he will really appreciate the 1600m.

“Marc has done all the work on him. He was suspended at his last start, but he’ll be back on him this Friday.”

After garnering most of his support from Hideyuki Takaoka and then, Jerome Tan, Lerner seems to have gained another fan in Fitzsimmons. Cliff Brown’s former assistant-trainer has been booking the French jockey often this year, with Elite Conquest in the $70,000 Class 3 race over 1600m, also pairing up the same combination.

“Elite Conquest finished very nicely at his last start (Class 3 race over 1200m, when a closing fourth to Coming Through),” said Lerner.

“He’s been trialling well and I hope he can reproduce the same effort on Friday.”

The US-bred six-year-old by Australian champion Lonhro was a five-time winner in Canada when then known as Conquest Swagman, but has yet to break the duck at Kranji in nine starts, with the first six coming for trainer Lee Freedman.

Fitzsimmons is hopeful Elite Conquest’s winning turn would come sooner rather than later, and why not this Friday itself.

“After he came to us from Lee, he had one okay run and one more run which was disappointing,” recalled Fitzsimmons.

“I then gave him a long break, during which time he had a procedure to his throat as he had an issue in his breathing. That turned him around as we saw on his last run.

“All his runs in Canada had been on dirt. I would have preferred a Polytrack race over 1400m, but as there is no such race here, I’m running him over the mile.

“While it’s not ideal, I didn’t have a choice. From the way he finished off at his last race, it shouldn’t be a problem.

“I would probably have liked another week, but as there aren’t many mile races in this class, I had to back him up after two weeks.

“Both horses are well, and I hope for the Elite Performance Stable that they can both perform well for them. They have supported me from Day 1 and have been very patient.” 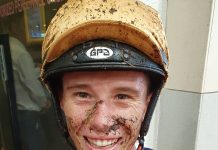 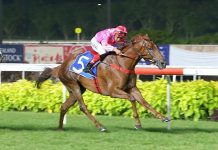