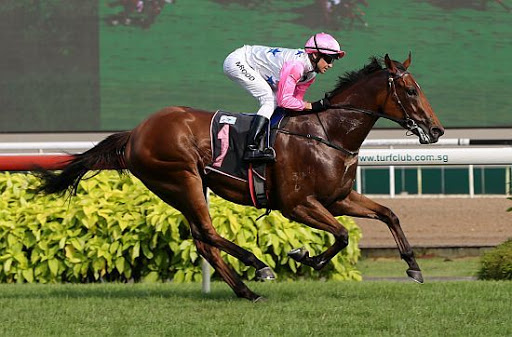 It was his first such hit-out since landing the Group 3 Saas Fee Stakes (1200m) in November, bringing up the Holy Roman Emperor three-year-old’s flawless record to four wins from as many starts, including a resounding victory in July’s Group 2 Aushorse Golden Horseshoe (1200m), which pretty much sewed up his Singapore champion two-year-old gong.

From the back of the field in Tuesday’s trial, Inferno progressed four wide without cover for regular partner Michael Rodd before powering towards an impressive half-length win from stablemate So You Too (Patrick Moloney), all in that trademark explosive acceleration that laid waste to his rivals four times last season, though it was clearly a much more throttled-down version.

Inferno (Michael Rodd) jig-jogging around on his way to the barrier trials.

Amazingly, the next major target set for the horse widely tagged as Debt Collector’s heir apparent (and it’s even more apt they both race in the white and pink colours of Barree Stable) is… a second Saas Fee Stakes.

As outlandish as this may sound, Inferno is indeed getting an ultra-rare chance of winning an age-specific race twice.

The quirky situation has been made possible simply because the Saas Fee Stakes is among one of many feature races involved in a calendar makeover this year.

Usually staged at the end of the year, it has been re-timed to a much earlier slot this year – March, which means that Southern Hemisphere-bred three-year-olds like an Australian-bred like Inferno is eligible for a rare shot at a repeat feat, since they turn one year older on August 1.

Brown is not one to dwell on such oddities. The down-to-Earth trainer is just treating it like another three-year-old race for his brilliant galloper to sink his teeth into – he just wished the interval was not as long.

Hence the need for a barrier trial to let off some steam, as well as a comeback/prep run next Saturday week on February 29, a Class 3 race over 1200m.

“It’s been such a long period between the two Saas Fees,” he said.

“There was nothing for him to do for so long. Then it’ll be on to the 3YO series (Singapore Three-Year-Old Challenge, which kicks off only in June from this year onwards), it’s just been a juggling act to get him right for those races.

“He needed a good hit-out today. That’s why I asked Michael (Rodd) to give him a bit of a squeeze.

“It was a very good trial. He has come back bigger and stronger after the break, we’ll just have to see how he goes, but overall, I’m happy with him.”

Rodd shared the same sentiments as Brown, while preferring to wait till he slips into his racing plates to have a better gauge.

“He showed his usual qualities. He sprinted home nicely when I circled him around them,” said the Australian jockey.

“He felt very good, it was a nice hit-out. He’s come back in good order and I can’t wait for his next race.”

Brown was also pleased with the performance of So You Too, a So You Think six-year-old who is still a maiden in four starts, and that of his third trialler, All Too Hard three-time winner Hardcore (Alysha Collett), who finished sixth about four lengths astern.

“They’re all in good form. Both Hardcore and So You Too are also running on that February 28 and 29 weekend,” said Brown.

“Hardcore is running in the Class 3 mile race on February 28 while So You Too will run in the same race as Inferno’s.”

One barrier trial earlier, Brown watched another one of his former stars, Zac Kasa (Daniel Moor) come out tops as well. Unsighted since his unplaced run in the Group 2 Merlion Trophy (1200m) in August, the son of Reset, now five years of age, has also been aimed at the February 29 meeting to launch his new campaign, a Class 1 Polytrack race over 1100m.

“Zac Kasa is fine. He was as usual a bit playful at the gates, but he’s okay,” he said.

“He lost his way a little last year, let’s wait and see how he is. Daniel Moor will ride him as he’ll be at a light handicap in that race.

“Daniel’s won on him before, so he knows the horse, which is good.”