Twice second at his first two Kranji starts, stymied mainly by bad barriers, Ironclad jumped straight onto the bunny from his better gate (five) in the $20,000 Open Maiden race over 1400m this time. Even if he wilted a touch inside the concluding stages, he would not be worried out of his maiden win at his third go.

Fast And Fearless (Daniel Moor) closed in late, but Burridge’s ward always had the wood on him, with three-quarter length the margin separating them at the wire. Tell Me (Shafrizal Saleh) ran third another gap of 2 ¼ lengths away. 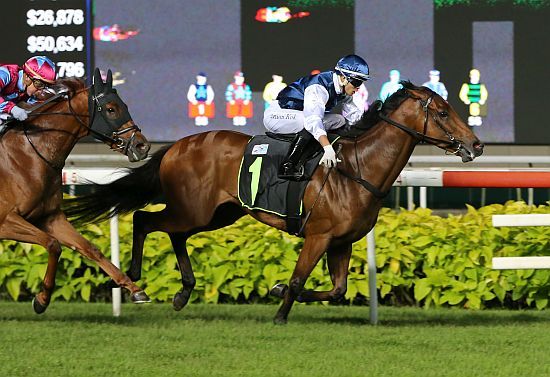 Ironclad (Simon Kok Wei Hoong) lives up to his short odds in Race 4.

Considered as the nap of the night, Ironclad returned a skinny $7 dividend to his investors, and recorded 1min 23.66secs for the 1400m on the Long Course.

Akeed Mofeed was a dual Group 1 winner in Hong Kong when prepared by Richard Gibson. The son of Dubawi won the BMW Hong Kong Derby (2000m) and the Longines Hong Kong Cup (2000m) in 2013 and was owned by Pan Sutong, who races last-start winner Gold Faith and Dazzle Gold with Burridge.

“We did tell the Stewards we would ride him more positive from the good barrier, but I left it to Simon,” said Burridge.

“We didn’t want to lead but we were left in front. He got tired late, but that was because it was his first time over seven furlongs and there was also a strong headwind down the backstraight.

“I think he will go and win some more races for us. A big thank you to Jeff Gordon, the Melbourne bloodstock agent who bought him for us.”

Kok said he was always on top of things even if the late swooper’s hooves were getting louder inside the last 100m.

“I rode him at his first start, he was fit enough from the start. But he was drawn badly at his two starts,” said the Singapore champion apprentice jockey.

“He was in a weak field tonight and as he drew well, I rode him with more confidence. I let him roll as I didn’t want to get choked up behind horses.

“It was a nice fighting win. He knows what to do, he doesn’t need blinkers at this stage.”

Thanks to his two seconds, Ironclad has already rewarded his owner, the CK Stable, with around $20,000 in stakes earnings.