Smart sprinter Bold Thruster allayed all the pre-race fears about his dubious getaways and first venture beyond six furlongs with a fighting win in the $175,000 Group 3 Fortune Bowl (1400m) on Sunday.

The Turffontein four-year-old had been his own worst enemy with his recent barrier blunders with his flying third in the Group 3 New Year Cup (1200m) after bombing the start the most gut-wrenching for connections, but while his highly-strung demeanour for the Chinese New Year (CNY) feature was still perceptible before he was loaded, half-the-battle was won when he broke on terms from his outermost alley in 14.

Jockey Vlad Duric had openly spoken of his battle plan all week. If it’s a clean break, he will utilise the whole length of the backstraight and the black gelding’s natural speed to overcome the wide alley and glide into a handy spot.

That part of the script was executed to a tee as the Tivic Stable-owned galloper came floating across the face of the field to sit outside stablemate Gingerella (Mohammad Nizar) at the 1100m.

Duric didn’t quite pull the handbrake at that stage. Loath to break his stride, the Australian jockey kept the “thrust” handle up on the free-galloping machine until they naturally rolled to the front, albeit still kept off the fence by Gingerella.

To some, it could be precious drops of petrol spent, tellingly so when he was a touch suspect at the seven furlongs, and main rivals Grand Koonta (Alysha Collett) and favourite and stablemate Countofmontecristo (Michael Rodd) were lurking as the most threatening swoopers to descend on the scene.

Beaten a whisker by Fame Star in the Group 2 EW Barker Trophy (1400m) at his last start, James Peters’ Grand Koonta looked well bent on going one better this time around when he dashingly collared Bold Thruster at the 300m mark. Countofmontecristo, who had begun a searching run four wide on the outskirts, and who seems to fit more into the miler mould these days, was not quickening as sharply as expected.

Bold Thruster ($26) was on the ropes. For a second it looked like the Thruster was busted, bearing out the knockers who had doubted his stamina at the trip.

But the ace rider still had something up his sleeve as he roused Bold Thruster back up with a few tastes of his persuader. As one, they rose back from the jaws of defeat to reclaim the lead and successfully repel Grand Koonta’s stinging challenge by a head.

Countofmontecristo was brave in defeat in third place another length away, evidently in need of more ground. The winning time was 1 min 21.7secs for the 1400m on the Long Course.

Trainer Michael Clements was in awe at Bold Thruster’s supreme effort at burning the candle at both ends, and still coming out tops.

“It was a big effort for him to get the trip, to lead for the first time over 1400m. He looked like a beaten horse halfway up the straight, but it was a gutsy effort for him to bounce back,” said the Zimbabwean-born trainer.

“We always knew he was a quality horse, but a lot depended on his jump and whether he gets the seven furlongs. Everything went well today.”

Clements said that hours of barrier reschooling had finally paid off for Bold Thruster, who was at his fourth ‘black type’ win, uncannily with all his previous accolades also earned at Group 3 level.

“The main thing is to make him stand better in the barriers. He gets too excited, and if his head is turned on one side, he misses the start,” he said.

“It’s a matter of getting him concentrated. He’s still fidgety, but at least he was more focused today.

“He was always a top three-year-old and as long as he gets over his barrier problems, he has the potential to become a very good horse.” 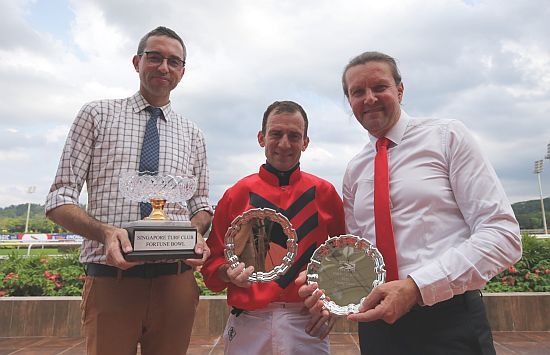 Duric couldn’t agree more with that statement. Even though Bold Thruster is not bombproof when it comes to his tractability, the three-time Singapore champion jockey backed his judgement about the horse’s inherent talent, and came up with the goods, even if it still boiled down to a fine line between success and defeat at the barriers, he said.

“He’s such a bulldog, he doesn’t make your job easy. Today, I tried to get his confidence back as I cantered him to the start, but he had a play again,” said the Australian jockey.

“He played up in the barriers, and It was all down to timing. One second he had his head against the corner, and I was like ‘oh no, don’t do it again’ but then as the gates flew open, he had his head straight and he jumped off good!

“Mind you, I have no doubt he will do it again one day, and we’ll just have to ride him back again. He’s such a good horse and he’ll give you his best again, anyway.

“After he jumped well, I let him stride forward – we didn’t have a plan, just go with the speed. Once in front, he put his head down.

“In the straight, I switched his leads and gave him a squeeze, but the other horse is a very good horse. I was worried about his light weight (52kgs) and he came to us quick.

“Alysha probably drew level with us, but when I gave my horse a bit of roaring, he stuck his head out. God bless him!

“Today, we went forward, but I’d be prepared to ride him back as he showed at his last race he has a great turn of foot.

“I think he can win the first Leg of the Four-Year-Old series, but whether he can go beyond the 1400m, we’ll have to see.”

Brought forward to an earlier time slot this year, the Singapore Four-Year-Old Challenge kicks off with the Group 3 Silver Bowl (1400m) on February 29, followed by the Group 2 Stewards’ Cup (1600m) on March 20, leading up to the grand final, the Group 1 Singapore Derby (1800m) on April 18.

While Bold Thruster’s galloping qualities have boosted his glowing statistics to eight wins, three seconds and one third from 15 starts for prizemoney in excess of $710,000 for the Tivic Stable of Mr Thomas Loke, he has also swept accolades in a totally different area – the beauty stakes. The fetching black gelding won the Best Groomed horse award, enriching his syce with a $500 reward