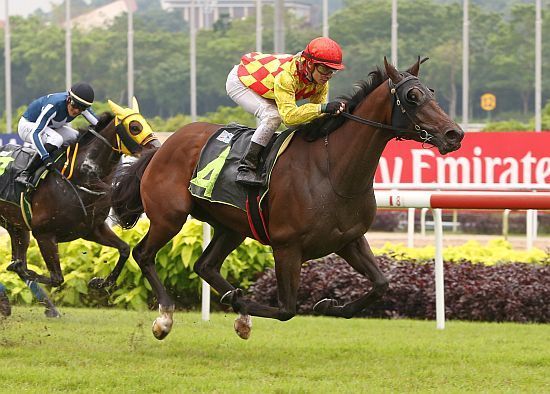 Cliff Brown’s talented duo of What’s New and Gold Strike will resume in this Sunday’s Group 3 $175,000 Fortune Bowl (1400m) with their trainer hoping of a good run for both.

As planned by the Australian handler, the traditional Lunar New Year feature race will be the starting point to their 2020 campaigns and serve as a guide to their current form following the Christmas break.

Going on their last 2019 runs, Gold Strike gives the impression he had more upsides, but Brown defended What’s New’s defeats in the Singapore Triple Crown series. To him, the game winner of the first two Legs of the Singapore Four-Year-Old Challenge last year had valid excuses to explain her unplaced runs.

“If you watch her replays in the EW Barker and the QEII Cup, nothing went right for her,” said Brown.

“She had excuses and hopefully that break since the Barker has done her a world of good.

“We’ll find out where she is at in the Fortune Bowl. She trialled really well last Thursday (January 16 when sixth to Bold Thruster), but a lot will also come down to the barrier draw.”

The daughter of Casino Prince certainly met with a lot of traffic problems in both the Group 1 Queen Elizabeth II Cup (1800m) and Group 2 EW Barker Trophy (1400m).

After drawing one in the QEII Cup, she was travelling sweetly on the fence, but clipped heels with Mr Clint at the halfway mark and lost considerable ground. Three weeks later, she was again tightened for room, both at the start and inside the concluding stages of the race.

Irish import Gold Strike always trailed his better-credentialled stablemate in the ratings, but the son of Iffraaj bridged the gap in the Group 1 Dester Singapore Gold Cup (2000m) with a flying second to Mr Clint. A hike of seven points saw him leapfrog over What’s New to now sit on 90 points, two clear of What’s New.

The 1400m first-up might be on the sharp side for Gold Strike, but Brown would not put a fresh run over such a journey beyond him. The main concern to him is the depth of the race.

“It’d be interesting to see where he is at with regards to Countofmontecristo and the other good horses in this race.

“There is still a long way to go for him. The better races at the end of the year (Raffles Cup, QEII Cup and Singapore Gold Cup) are his main targets.

“Both horses are well, but that first race will tell me exactly where they’re at.”

With the special weight conditions set for the Fortune Bowl, both horses will be lightly weighted.  Brown has booked two lightweight jockeys in Patrick Moloney and Juan Paul van der Merwe on What’s New (54.5kgs) and Gold Strike (52kgs) respectively.