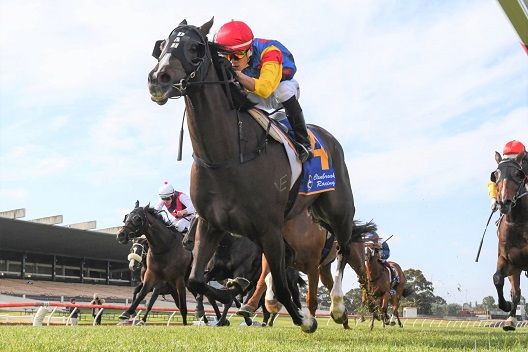 Barely three days after Singapore champion apprentice jockey Simon Kok Wei Hoong opened his account at his one-month stint in Victoria, Australia, he had this time booted home his first metropolitan win at the twilight midweek meeting in Sandown on Wednesday.

Just like he did aboard Inner Demons at Tatura on Sunday, Kok pulled off a similar frontrunning ride on A$2.90 favourite Pierrless in the Clanbrooke Racing Handicap (1500m).

Singapore apprentice Simon Kok is all smiles after winning his first metro win aboard Pierrless for @lindsayparkrace pic.twitter.com/NsC0Jp1YFV

It was Steven Burridge’s apprentice jockey’s second hurrah since his arrival in Melbourne on November 30 to begin the newly-launched exchange programme between the Singapore Turf Club and Racing Victoria, with both winners coming for his joint masters for a month (he returns to Singapore on December 29), David, Ben Hayes & Tom Dabernig.

Pierrless, a four-year-old mare by Pierro, won by 1 ¼ lengths, which is around half the margin of his debut win in country Victoria, but Kok said Wednesday’s win was easier.

“The second win was easier. The mare is stronger,” said Kok.

“Once I bounced her out, she found the lead easy. She pulls quite hard, but luckily, I got her to relax.

“She wanted to charge early, but I didn’t want her to move until the last 400m. Sandown is like Singapore, big and wide, but there is a dip at the 400m as it does go a little uphill then.

“I wanted to balance her up before asking her for the last effort to the line.”

Ben Hayes said Kok, whose four rides up to now have all been for Lindsay Park, was keen to learn and had the makings of a good jockey.

“He’s done a good job for us and I think he’s got a very good future,” said Hayes.

Kok’s next rides (all for his masters) will be back in country Victoria. He is booked for three rides (Miss Scalini, Mi Keri Pi and Pontivy) at Geelong on Friday and another three rides (Penny Moon, Tina Sparkle and Storming Eclipse) at Cranbourne on Saturday.

“My next rides are in Geelong. I have three rides, they are not favourites but with some luck, I hope I can win another race,” said Kok.