The list of jockeys and apprentice jockeys who have been granted licences by the Singapore Turf Club for the 2020 racing season are as follows:

Of the 11 expatriate jockeys, nine are renewals while two new licences will be granted to Brazilian jockey Ruan Maia, who is no stranger to Kranji having won the Group 2 Chairman’s Trophy on Circuit Land at a one-day visit in 2018, and South African jockey Ryan Munger.

At his first visit in April 2018, the Brazilian landed the Group 2 Chairman’s Trophy on Circuit Land for Lee Freedman. He returned for another two big-race assignments on the same horse later in the year, finishing third in the Group 1 Queen Elizabeth II Cup and second in the Group 1 Dester Singapore Gold Cup.

With a 13 years of riding experience, Maia has racked up more than 550 winners, around one third of which came in Macau where he relocated from his Sao Paulo base in September 2016.

He took the Taipa racing scene by storm right from the start, booting home 31 winners to finish fourth on the ladder at his first season before being crowned champion with 60 winners in the 2017-2018 season and 71 winners in the 2018-2019 season. He currently shares the same number of winners (nine) as fellow Brazilian Dayversom Barros, but leads on a countback for seconds.

Maia has won feature races both in Brazil and Macau. In his home land, his highest acclaims came in the 2016 Group 1 J Adhemar de Almeida Prado aboard Maraton in Sao Paulo, while the Group 1 Macau Gold Cup with River Control in 2018 and the Group 1 Chairman’s Challenge Cup with Mister Kaopu in March rank among his top achievements in the former Portuguese enclave.

Maia goes to scale at 53kgs. 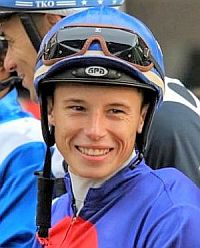 Ryan Munger, 24, is a South African jockey who chose this career path after he was inspired to follow into the footsteps of his jockey-uncle Stuart Randolph. He enrolled at the South African Jockey Academy in 2011 and after rapidly rising through the ranks, now figures among the leading jockeys on the national log.

Crowned Zimbabwe champion jockey in the 2017-2018 season, the Durban-born Munger was first based in Johannesburg. He moved to Cape Town in October 2018 to briefly join trainer Glen Kotzen as his stable jockey before going freelance shortly after.

Last year, Munger finished eighth on the national log on 127 winners. He currently sits in eighth place on 31 winners.

He has racked up around 570 winners, including four at Grade 3 level and six in Listed races. His first Grade 3 wins came in the Caradoc Gold Cup with Ilitshe at Turffontein in 2017, while other notable feature wins at Turffontein include the Grade 3 Graham Beck Stakes with National Park last November and the Grade 3 Pretty Polly Stakes with Palace Of Dreams in March.

In terms of overseas experience, Munger took part in an apprentice jockeys’ challenge in Abu Dhabi back in 2014.

Munger goes to scale at 51kgs.