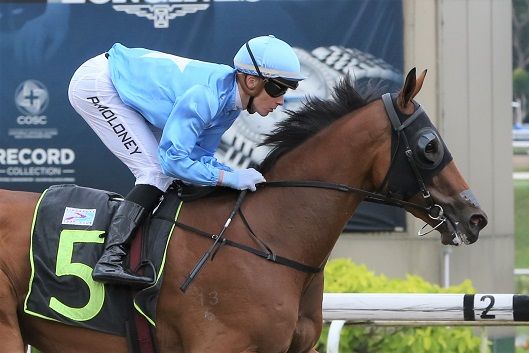 Melbourne jockey Patrick Moloney couldn’t have been happier with the way his short Singapore stint has gone – and has already set his sights on a longer stint next year.

Licensed for only one month (August), the 25-year-old lightweight rider has brought up a decent haul of four winners (Diamond Ring, Mr Malek, Just Landed and Ocean Crossing) from 38 rides, not to mention four seconds and five thirds.

Moloney is keeping his fingers crossed he can end that first Kranji foray with a flourish at his last meeting this Friday, even if he has a book of only three rides.

I’m really happy with my first experience here. I’ve ridden four winners and let’s hope I can improve the score at my last meeting this Friday,” he said.

“I have only three rides, but I think Muraahib (in the Class 3 Division 2 race over 1200m) is among one of my best chances. He was trained by David Hayes and Tom Dabernig in Melbourne, and though I don’t really remember him there, I know he was a nice horse.

“It was great to be well received by everybody here, whether it’s the owners or trainers or the Singapore Turf Club. I’ve received great support from leading trainers like Lee Freedman, Stephen Gray, Cliff Brown, Donna Logan, and Saimee Jumaat.

“I’ve ridden nice horses for most of them and I’ve really enjoyed my time here.”

When asked to compare Singapore with his Victorian backyard, it’s the less testing racing schedule in the Lion City which was the main draw to him – among a few others.

“It’s less tedious here. The good thing is you guys race only on Friday and Sunday and you really look forward to those two meetings,” said Moloney who hails from a racing family in Victoria.

“It makes you keener and I really enjoyed that aspect of racing here. It has also sharpened up my riding, you have to think a bit more, especially with so many apprentices around, it’s ultra-competitive here.

“Off the track, it has improved my networking skills. Here I have to manage myself for the rides, whereas back home, I had a manager who took care of that.

“It’s really up to me here and it really depends on how hard you want to work.”

Moloney said he had already lodged an application for a longer term in the new 2020 season. While waiting for the reply, he said he would just head back home to his former routine.

“After my last meeting on Friday, I will return home and just carry on with what I was doing before I came here,” he said.

“I’ve got some young horses, some three-year-olds that I am really looking forward to riding.

“Other than that, I don’t have anything lined up for the Spring Carnival. I’ll just wait to start the new season in Singapore on January 1 – if my application gets through, of course.”

While Moloney has singled out Muraahib as his best chance to end on a winning note on Friday, Freedman would like to see a better run than what the Reset five-year-old showed on debut in a Class 3 race over 1000m on August 2, especially after gapping his rivals by nearly eight lengths in a barrier trial in July.

“He’s a good horse and went all right. I think we have to forgive that run and judge him on his second run,” said the Singapore champion trainer.

“He’s won two-from-two on the all-weather in Australia and is going back on Polytrack this Friday, but over 1200m this time. I hope he runs a better race.”