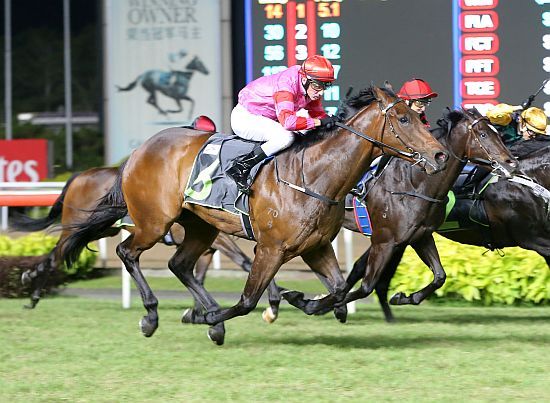 via Michael Lee, Singapore Turf Club
23/08/2019
Melbourne import Wassergeist bounced back to the winner’s enclosure following a tough-as-nails victory in the $70,000 Class 3 race over 1200m on Friday night.

After a smart debut win in a Class 4 event over 1200m on turf at Kranji on June 21, the Fastnet Rock five-year-old disappointed at his next two runs in tougher company, but trainer Shane Baertschiger, who also owns him, knew where he might have erred.

He put a line through Polytrack and also brought him back in distance in the wake of his last-start defeat when he compounded after taking up the running in a seven-furlong race.

Wassergeist (John Powell) storms home on the outside to take out the Class 3 race.

The Australian handler told stable jockey and Wassergeist’s regular partner John Powell – who was at his only booking of the night – to just allow him to drop back where he was comfortable this time around.

The tweaking of tactics coupled with a return to his winning course and distance hit paydirt.

After dodging the early speedmap in the small eight-horse field, Wassergeist ($19), which means water ghost in German, came floating menacingly on the outside as he cornered for the run to the judge.

Pacemaker Elise (Mohammad Nizar), who had tried to make all, was a spent force at the 400m, and was quickly gobbled up by Charger (Simon Kok Wei Hoong) and So You Too (Michael Rodd), who came off a late betting plunge to start as the favourite.

Also chiming in was Wassergeist, who though rather tradesman in his action, came wearing down the leading pair with every stride to eventually upstage So You Too by three-quarter length with Charger a nose away in third.

“Second-up on Polytrack didn’t suit him and he worked too hard at his last start,” said Baertschiger who is now two winners short of his 400th win at Kranji since taking over his father Don in 2012.

“I dropped him back and the Long Course suits him. It was a small field but competitive, even if he didn’t beat a hell of a lot tonight.

Powell thought he might have cut the ribbons a tad too soon, but was glad the result went their way when it mattered.

“We didn’t ride him right at his last start and he failed on the Polytrack,” said the Australian jockey.

“We went forward and he went too quick. Tonight, Shane told me to ride him where he is happy.

“I actually didn’t want to get there too early. I’ll probably wait a bit longer next time.”

With that second win, Wassergeist, a two-time winner in Melbourne (1200m and 1400m) when trained by Trent Busuttin and Natalie Young, has now taken his prizemoney level past the $65,000 mark for Baertschiger.