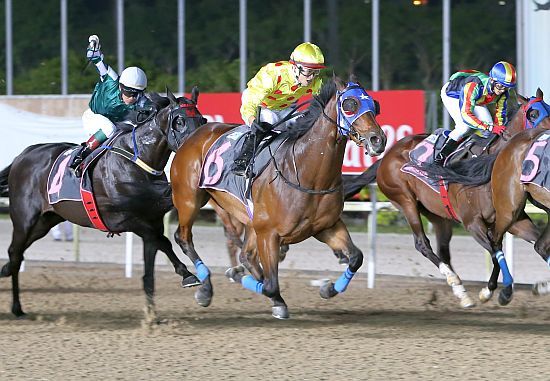 via Michael Lee, Singapore Turf Club
23/08/2019
A maiden win at his last start seems to have whetted the appetite of the vastly-improved Dazzle Gold for more on Friday night.

The US-bred four-year-old son of Lemon Drop Kid (sire of last year’s Polytrack champion Maximus) opened his account at start No 9 in a Polytrack mile race when dropped back in Class 5 company on August 11.

Raced by Hong Kong owner Pan Sutong (of Akeed Mofeed and Gold-Fun fame), Dazzle Gold vindicated trainer Steven Burridge’s decision to step him back up in grade in the $50,000 Class 4 race over 1700m.

On straightening, Beuzelin went for broke on Across The Sea, but the swoopers were descending at a steady rate, with Dazzle Gold, who had to switch across heels in search of daylight, and Solo Sun (Noh Senari) letting down with the sharpest runs.

Still, a feisty Across The Sea gave the impression he could hand his French rider a second win following his Kranji first aboard Universal Empire last Sunday, but they had not reckoned with Kok driving hard astride Dazzle Gold right on the outside.

Depicting perfectly the mini-United Nations housed under the Singapore Turf Club, America got the nod for a Malaysian rider and Australian trainer, three parts of a length ahead of the Japanese-Franco combination of Across The Sea and Beuzelin with the newly-forged Singaporean force of Desmond Koh-Noh Senari in third place another neck away through Australian-bred Solo Sun.

Dazzle Gold clocked 1min 45.94secs for the 1700m on the Polytrack and has now chalked up a record of two wins and one second from 10 starts to double his stakes earnings to around $60,000 for Pan Sutong. He came to Singapore with a record of one win from six starts in UK for around US$7,400 in prizemoney.

“He is very well-bred and cost £235,000 as a yearling. He was bought at the ready-to-run sales and was gelded soon after,” said Burridge.

“He needed more time to mature, he took a while to hit his straps, and Simon rode him great tonight.

“I think he’s a horse who could go on. We were clutching at straws when we ran him on Polytrack at his first start.

“He didn’t travel that well, but he has got fitter and he was able to handle a bit of distance better.”

Kok weighed back in saying he had gone into the race full of confidence and was certainly not let down by the gallant gelding.

“I’m very happy this horse was able to win back-to-back. He had only 50.5kgs on his back,” said the leading apprentice jockey who has now extended his lead to 10 winners on Shafrizal Saleh (23 versus 13 wins).

“I was pretty sure he would run a good race tonight. He jumped off really good, but they turned off the tempo on the turn.

“They slowed down at the 1200m, but when the pace went back up, he quickened up very well.”