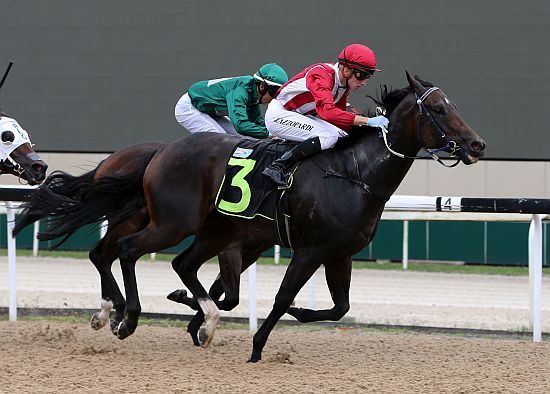 To the Singaporean trainer’s credit, she took a chance by taking the former Perth one-time winner over 1200m (Pinjarra) and five-in-a-row achiever at his first five Kranji starts (1000m to 1200m) out of his comfort zone in the last two Legs of the Singapore Four-Year-Old Challenge over 1600m (Group 2 Stewards’ Cup) and 1800m (Group 1 Singapore Derby).

While the son of Patronize did make ground to run fifth in the Stewards’ Cup on June 30, he was at the rear throughout and never threatened in the Singapore Derby on July 21, beating one home.

Nimble (Joseph Azzopardi) at his fifth consecutive win on April 19. He has tasted defeat three times since.

The former air stewardess, who took over her father, the late Douglas Dragon in 2011, can train a Group winner, make no bones about that.

It’s just that after going back to the drawing board and taking stock of Nimble’s last two starts, she conceded that he was in hindsight not quite ready for more ground, at least not at this first prep.

“Running in the Stewards’ Cup and the Derby was stretching him too much. It’s probably best to keep him at what he’s best at, sprints,” said Dragon.

“We had a rethink and decided to bring him back to 1200m and 1400m max. There was a choice between the Merlion Trophy and a Class 2 race over 1200m next Friday.

“In the end we went for the Merlion Trophy, even if he’s running at level weights against higher-rated horses.

“The Polytrack is a plus for him as three of his five wins were on Polytrack. We’re basically going back to basics with him.”

Dragon said she had given Nimble only a short freshen-up after the Derby as he had pulled up well. As for his work since, it was as usual a case of running an eye over his general condition and coat as he is a noted “bludger” in the morning.

“He has been his casual cool, but I must say I’m pretty happy with his trackwork so far,” she said.

“I’ve booked the new French jockey Louis-Philippe Beuzelin who galloped him on Tuesday. He was very happy with him and is also very happy for the ride as well, given he is new and is happy to get a ride in a feature race so early into his stint.

“He’s actually a horse who can adapt to any rider as he’s had five different jockeys in eight starts so far and three jockeys have won on him, John Powell, Michael Rodd and Joseph Azzopardi. He’s a straightforward ride.

“He seems to go okay with Louis. He’s drawn eight which is a bit awkward in a 12-horse field, but I’ll tell Louis to just let him jump where he is happy.

“I think he can bounce back to his best on Sunday.”