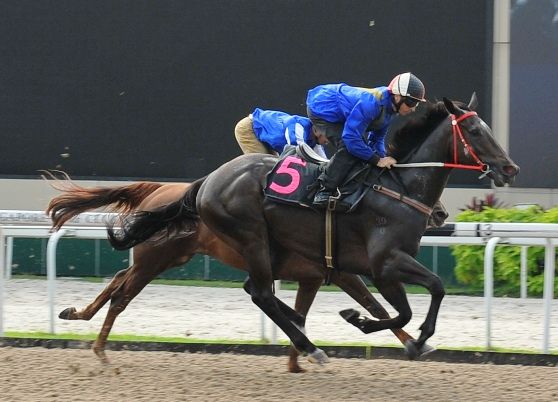 The 2014 Singapore Horse of the Year has won almost all before him, but while the spirit is willing and he still has a lofty rating of 116, those legs are obviously not as power-packed as those that propelled him to 16 wins over five glorious seasons, including five at Group 1 level.

Shortly after his last win (dead-heat with Storm Troops) in the Group 3 Saas Fee Stakes (1400m) which dates back to May 14, 2017, the $3 million stakes earner was beset by wind issues that might have spelled the end for your average joe of the racing world, but the son of O’Reilly is a fighter and was brought back for one last shot at glory.

War Affair has countless barrier trials on Polytrack under the belt, but racing on it will be a first caper for
him on Sunday.

In four runs since his return from a beneficial New Zealand rehab to fix his respiratory problems, War Affair has not won, but didn’t give the impression he didn’t enjoy his racing anymore either.

If anything, the old champ sent pulses racing again at his last start when he drew on level terms with leader Biraz in the Group 3 Jumbo Jet Trophy (1400m) at his last outing on July 28, before blowing out inside the last 100m to run fourth, just a little over half-a-length off the winner Star Emperor, missing a podium finish to Elite Excalibur by a short head.

While seeing those shades of the old self was uplifting, Marsh is not getting too carried away. The veteran trainer has not cast anything in stone for the Ong family’s brave warrior, but not many would have guessed a shot at the all-weather at his 36th start would be on the cards.

The Merlion Trophy will for the first time this year be run as a standalone feature – and later in the year compared to its usual April slot – with the discontinuation of the Singapore Sprint Series.

It was last year moved as the second Leg after kicking off the series since its inception in 2009, with the Group 3 Rocket Man Sprint (1200m) and the Group 1 Lion City Cup (1200m) the other two instalments, also run on their own merit now.

The Merlion Trophy is the richest of only three Polytrack feature races left on the Singapore racing calendar. The other two are the traditional season bookenders, the $200,000 Group 3 New Year Cup (1200m) and the $175,000 Group 3 Colonial Chief Stakes (1800m) always held at the last meeting of the year, on December 8.

“There was nothing else for War Affair. We thought why not run him in the Merlion,” said Marsh.

“Yes it’s his first run on Poly. We trialled him with blinkers on (sixth to Bold Thruster on August 18) and he handled it very well.

“It was the first time he had ever been fitted with a set of blinkers other than at his first blinker test a long time ago.

“(New race partner) Alysha (Collett) was very happy with that trial. He’s a genuine horse and trialled as good as anything.

“He ran enormous at his last start (with Vlad Duric up). We got excited for a while, but it’s just in the last few metres that he could not quite go on with the job.”

Marsh said the run in the Merlion Trophy will serve as a good guide to his future endeavours. Nothing concrete has been locked away, even if the Singapore Triple Crown is just around the corner with the Group 1 Raffles Cup (1600m) kicking it off on September 22.

The Singapore Triple Crown is a series War Affair has contested three times, producing the best result in 2014 when then prepared by trainer Alwin Tan, landing the first two Legs but coming up short for the clean sweep in the Longines Singapore Gold Cup, then run over 2200m and won by the late Quechua.

“We have to take it race by race with him. There is nothing set for him, each race will tell us where he is at,” said the Kiwi handler whose son Stephen raced War Affair twice during the New Zealand stay in 2018, both in Group races, albeit without success.

“It’s a bit of a test for him on Sunday, being his first time on Poly and the blinkers, but he’s well and he’s maintained his condition.

“We don’t see him up on the speed for sure on Sunday, but the good thing is it’s a weight-for-age race this time and he’ll be at level weights (57.5kgs) with the other horses.

“As long as he hits the line nicely, we’ll be happy.”