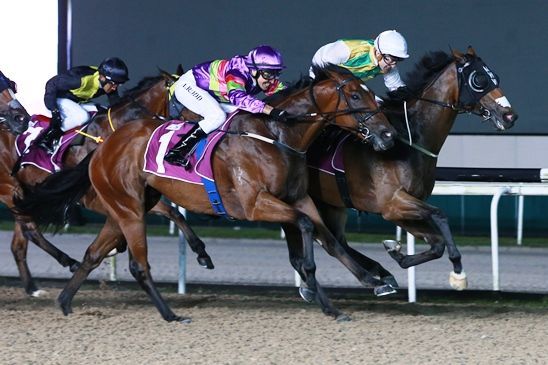 While such a title may sound flattering given Hideyuki Takaoka’s champion stayer El Dorado’s unmatched Kranji feat of three Singapore Gold Cups (2008, 2009 and 2011), it’s that carefully-crafted programme towards one annual target that is the common streak here.

After his first Gold Cup, El Dorado raced sparingly at his next four seasons, with his lead-up races all geared towards the Group 1 Singapore Gold Cup (2200m) in November.

Distinctive Darci (Vlad Duric) sneaks up on the rails to down Countofmontecristo (Michael Rodd) in last
year’s Merlion Trophy.

Distinctive Darci may well be stuck in the same one-dimensional campaign. He grows another leg on the Polytrack and with his rating of 105, he is a square peg in a round hole.

Virtually only one race fits, the $400,000 Group 2 Merlion Trophy (1200m) on Polytrack, which he claimed last year when then slated as the second Leg of the Singapore Sprint Series and run in April.

The all-weather is not the only allure to the Darci Brahma six-year-old whose nine wins all came on that surface, and was a nominee for the Polytrack champion title last year, but lost to Alwin Tan’s Maximus at the polls. It’s also a weight-for-age event where he would not be burdened with a back-breaking impost.

It is with great relief that trainer Mark Walker sees the Polytrack feature finally on the racecard this Sunday.

“Distinctive Darci runs badly on grass and the only opportunity he has is the Merlion Trophy,” said the two-time Singapore champion trainer, who is well clear in this year’s premiership and well on his way to a third title.

“There are not many races that suit him, it’s been very frustrating. He is way at the top of Class 1 and most of the time he has to carry 59 or 60kgs and runs against younger horses who carry only 50kgs.

“Sometimes, when I put a claimer on, he is slow away and then, he storms home for fourth place. The Merlion Trophy is the one race that suits him – it’s on Polytrack and it’s at set weights.”

Champion jockey Vlad Duric, who was aboard at four of his nine wins, including last year’s Merlion Trophy, then run in April and which was also his last win, will try and guide Dato Terry Lee’s honest galloper to back-to-backs wins in the 1200m dash.

“Hopefully, they can win a second year in a row, but to be honest, it’s the best race I’ve seen all year, at least for a Polytrack race. It’s a very strong field.”

On Friday, Walker will be hoping for a return to better form from debut winner Barbeque in the $30,000 Class 3 race over 1200m.

The Helmet five-year-old lived up to his previous Godolphin polish (three wins for trainer James Cummings, including one at Flemington over 1700m) with a perfectly-timed short-head win in a Class 3 race over 1200m at his Kranji debut on April 7.

But he fell by the wayside at his next two starts, leaving Walker scratching his head for answers, which, luckily, he got soon enough.

“Barbeque was disappointing at his last two starts, but we found out he was starting to tie up,” said the Kiwi mentor.

“We gave him a spell, changed his diet and his prep, and he’s been shaping up the right way. Friday’s race is a little bit short, but I expect him to run better.”

The Te Akau Racing Stable-owned galloper will be ridden by the jockey who has struck the highest success rate with Walker this season, Benny Woodworth. The Malaysian, whose win on Walker’s Elite Invincible in last year’s Dester Singapore Gold Cup (200m) was the real trigger, was aboard at 19 of Walker’s haul of 55 winners, roughly one in three.