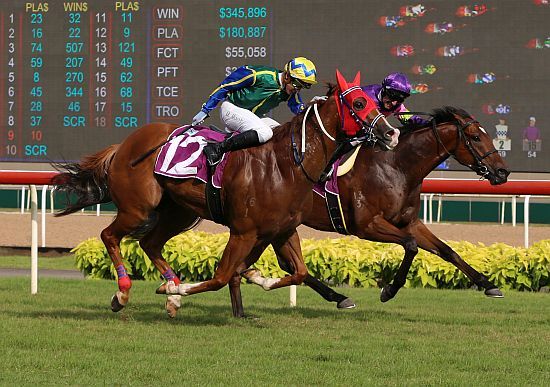 via Michael Lee, Singapore Turf Club
20/08/2019
Kranji Mile runner-up Blizzard makes his way back to racing by diving straight back into another feature race on Sunday, but trainer Lee Freedman was staying guarded about his chances first-up from a three-month layoff in an event that would not normally be up his alley.

The Hong Kong-owned sprinter-miler is one of 16 entries in the $400,000 Group 2 Merlion Trophy (1200m), well established now as the championship of Polytrack sprint, even if it’s not one Leg of the Singapore Sprint series, which was discontinued this year.

Blizzard (Daniel Moor) at his only local win, in the Group 3 Fortune Bowl on February 6.

He only discovered the all-weather when he landed here, at his first two starts. He did not set the synthetic track alight, but neither did he take a flogging, even producing a closing fourth in the Group 1 New Year Cup (1200m).

Freedman, however, said that the Group 3 Fortune Bowl (1400m) winner (his only Singapore win thus far in seven starts) was more in his element on grass, but with his new campaign aimed towards the Group 1 Raffles Cup (1600m) on September 22, he had to kick off somewhere.

“He’s not really a Polytrack 1200m horse, but there was nothing else for him in the lead-up to the Raffles Cup,” said the Australian trainer.

“He did run twice on Polytrack and didn’t do too badly, but he’s nowhere as good as he is on grass. He tends to scramble on the Poly.

“We gave him a little break after the Kranji Mile. He’s kept swimming and had a nice freshen-up.

“Obviously, he carries a bit of condition, but he’s always been a gross sort of horse, anyway.”

Freedman has booked visiting Victorian jockey Patrick Moloney for the steering job in this Sunday’s comeback race. One of Moloney’s three winners at his short one-month stint is for Freedman, Mr Malek on August 11.

“Blizzard is fine, but the main target for him is the Raffles Cup,” said Freedman.

“After he ran second in the Kranji Mile, the mile was always going to be his go, and that’s why we’ve aimed him at the Raffles Cup.

“We’ll see how he goes and then think about the second Leg (of the Singapore Triple Crown series), the Group 1 Queen Elizabeth II Cup (on October 20).

The third Leg of the series is the Group 1 Dester Singapore Gold Cup over 2000m on November 10.

Regarded as a top sprinter in Hong Kong when trained by Ricky Yiu – he even ran fifth to Fine Needle in the Grade 1 Takamatsunomiya Kinen (1200m) in Japan in March 2018 at his second-last run before the Infinitude Stable sent him to Kranji – Blizzard has been conditioned over longer trips by Freedman.

The big chestnut has yet to break his duck in three tests over the mile, but his runs had not been without merit, especially his closing second to former Sha Tin rival Southern Legend in the Group 1 Kranji Mile (1600m) in May.