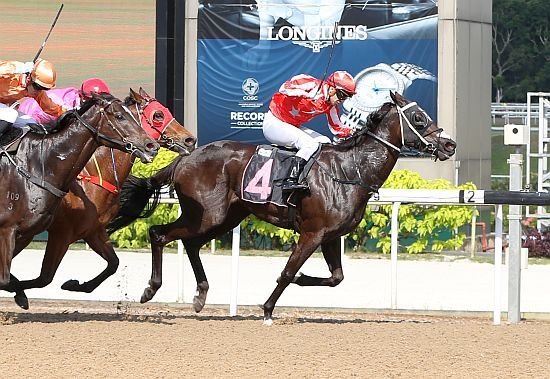 via Michael Lee, Singapore Turf Club
18/08/2019
Irish sprinter Nova Vocal bounced back to winning ways in commanding style on Sunday, but trainer Mark Walker remained concerned his wind issues could still be a potential thorn in his side.

Formerly prepared by English trainer James Peters, the Vocalised four-year-old recorded the last of his three previous Kranji wins in a Class 3 race over 1100m on November 4.

After six more runs, which, even though were not greeted by another win, but still yielded a solid record of three seconds and two thirds, the Nova Racing Stable decided it was time for a change of scenery.

Nova Vocal (Vlad Duric) bounces back to his best on Sunday.

The beneficiary was two-time Singapore champion trainer Walker who said that Nova Vocal came to his yard in good shape, but he was always mindful of his niggling breathing woes.

“He’s actually a horse who is difficult to train,” said the New Zealander.

“Hopefully, he will gain something from today’s win. I told the owner I would put a tongue tie on today, but unfortunately, he may still need a wind operation down the road.

“He came to us in good order from James. He was drawn wide at the barriers at his two starts for us.

“He won well today, but I tend to think he’s a lot better off with a wind op. I will need to talk to his owners.”

Duric said the race panned out as they wanted when Nova Vocal ($16) began smartly before steering clear of any speed battle when favourite Excelling (Michael Rodd) came sliding forward to serve it up to them. Nova Vocal just stayed on Excelling’s girth, travelling kindly on the bridle.

At the 400m pole, Lee Freedman’s debut all-the-way winner was still giving plenty of sight, but once Duric got busy on Nova Vocal, it became a no-contest.

As Excelling caved in rather meekly, Nova Vocal raced past without wasting time, but was not quite over the line at the 100m when Sir Isaac (Patrick Moloney) and Flak Jacket (Matthew Kellady) came with rattling runs.

But Nova Vocal’s class saw him get there first, keeping a half-length margin to spare from Sir Isaac while Flak Jacket had to settle for third place another short head away. The winning time was 1min 5.47secs for the 1100m on the Polytrack.

“He’s a genuine Class 3 horse who has improved after two runs for Mark,” said Duric.

“Michael’s horse was the horse to beat, but fortunately, we were able to worry him out of it.

“I’m mindful he is still a young horse and I know he has some wind issues. He still made some noise, and he was getting a bit tired towards the end, but it was still a good tough win.”

That fourth success has now rounded up Nova Vocal’s stakes earnings right about the $230,000 mark for the Nova Racing Stable.