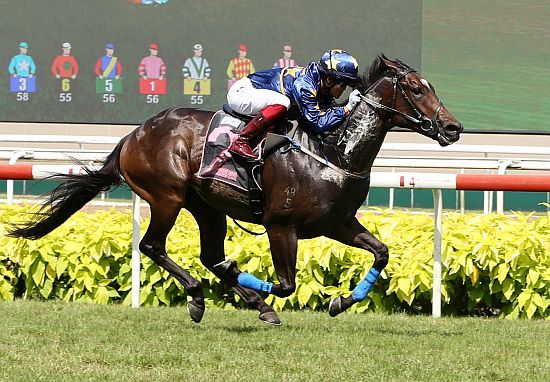 The Smart Missile four-year-old was at the same time registering back-to-back wins, while giving trainer Steven Burridge a perfect 100% record given he was his only runner for the day.

An impressive winner from another hold-up run at his last outing in a Class 4 Division 2 race over 1400m two weeks ago, Lim’s Craft replicated the same pattern with a dynamic win that had Burridge predicting a bright future for Lim’s Stable’s galloper.

Lim’s Craft (Benny Woodworth) clears out for a facile victory in Race 5.

“He did a good job today. He’s an up-and-coming sort who had a couple of issues at the barrier, but he seems to be getting better,” said the Australian trainer.

“He is a horse who needs to be ridden off the pace. He’s a nice horse who will go through his grades, I don’t know how far he will go, but more racing has certainly taught him to settle.”

The even-money favourite gave his legion of backers few anxious moments the moment he improved from his centerfield berth to attack the line around the field.

At the top of the straight, Lizaz (Amirul Ismadi) was showing some cheek when he strode past leader Shoot Up High (Wong Chin Chuen), but there was little he could offer when Lim’s Craft came roaring past at the 300m.

Jockey Benny Woodworth just had to point the smart gelding in the right direction, such was the authority of the turn of speed. At the line, the Malaysian rider could sit up and pose for the camera with Silent Force (Joseph Azzopardi) second 2 ¾ lengths away.

Lizaz faded in the end, but did well to hang on for third place another 2 ¼ lengths away. The winning time was 1min 9.7secs for the 1200m on Polytrack.

“He’s a nice horse, he settled nicely. He travelled a little wide, but when I switched him out, he showed a nice turn of foot,” said Woodworth.

“He was laying in a little bit, but he won well. He travelled so well for me, he didn’t give me any concern at any part of the race.

“He quickened up well once I pushed the button.”

A real model of consistency, Lim’s Craft has now taken his handy record to three wins and two placings from six starts for prizemoney closing in on the $120,000 mark for the Lim’s Stable.