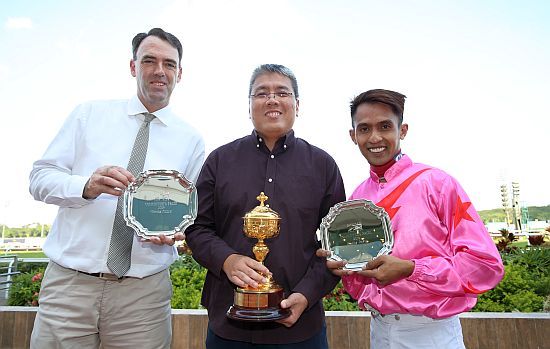 via Michael Lee, Singapore Turf Club
18/08/2019
Nineteen years after former Kranji trainer Don Baertschiger landed the inaugural Committee’s Prize with Con Air, it was his son Shane who added his name to the roll of honour with lightweight chance I’m Incredible on Sunday.

Baertschiger was then assistant-trainer to his father when the brilliant Con Air produced his trademark turn of foot for stable jockey Eddie Wilkinson to become the first winner of the Group 3 race over the mile.

Much water has flown under the bridge since, including Don’s retirement in 2012 and the handing of the baton to Shane the same year, Shane’s own moment in the sun with more than a dozen of feature wins as a trainer in his own right, the pinnacle being undoubtedly Aramco’s Group 1 Lion City Cup in May.

But winning the same feature race his father captured 19 years ago and by coincidence in almost identical pink colours bore a special meaning to Baertschiger, especially after he was teasingly called “crazy” when he said he would run a last-start Class 4 winner in a Group 3 race.

Rated only 69 and dwarfed by the other 10 rivals all in a bracket of 84 to 102 points, the son of Lope De Vega was also worse off at the weights given he should have on paper carried 46.5 kilos with respect to the topweight Elite Invincible (59 kilos at 102 points but who was eventually scratched), but carried 50kgs instead.

In racing, figures and mathematics are a numbers game that gets thrown out the window at times. The real deal is played out on the track, and Baertschiger was convinced it was a winnable gamble despite the chasm in ratings.

A quick glance at the heavyweights in the line-up made his confidence grow. The booking of A’Isisuhairi Kasim, noted for being a big-race jockey and with whom he has been combining successfully of late, added to the bullishness going into the $175,000 event.

The smiles grew even wider when a horse who does not typically go forward, Japanese mare Makanani (Wong Chin Chuen) flew the lids to open up to a commanding lead of eight to 10 lengths down the back and round the second bend.

That was a scenario Baertschiger and A’Isisuhairi had not reckoned with – it transpired later on in the Stipes report that Makanani overraced – but welcomed with glee.

Into the home straight, Makanani was still well clear at the 400m, but started to send signals of distress at the 250m. The last-start winner, who has never assumed that bunny role, did not fall into a heap like those typical pacemakers do, and with jockey Wong Chin Chuen riding for dear life, she still had two lengths to spare then.

After running past the weakening McGregor (Shafrizal Saleh) at the top of the straight, I’m Incredible was the first cab off the rank.

Spearheading the charge of the light brigade, I’m Incredible ($26) kept whittling down the margin and as he came within striking distance, he pinned his ears back and inexorably swept past Makanani on his way to a stunning giant-killing act that claimed many scalps like King Louis, Star Emperor and Bahana, all Group winners and even a Brazilian Group 1 winner in Elite Quarteto.

Despite a tearaway lead that would have softened her up significantly, Makanani showed she was equipped with a great set of lungs by clinging on to the runner-up spot one and a half lengths away. Trainer Hideyuki Takaoka and the Big Valley Stable would no doubt rue the surfeit of pace their brave mare showed in the first two thirds of the race, wondering what could have been if she had been more tractable.

Third place went to recent Group 3 Jumbo Jet Trophy (1400m) winner Star Emperor (Simon Kok Wei Hoong) who let down with a late rush on the outside. With the sizzling sectionals set by Makanani, it was not surprising to see I’m Incredible clock a smart time of 1min 34.4secs for the 1600m on the Long Course, only 1.12 second outside the record set by Magneto, by coincidence, in the Committee’s Prize in 2014.

Among the beaten brigade, King Louis (Daniel Moor) reproduced his Jumbo Jet Trophy run (flying third to Star Emperor) with a fourth place after making ground from the back, but not enough to topple the winner. I’m Incredible’s much more senior stablemate Blue Swede (Matthew Kellady) was again equal to the task, beaten into fifth place by a pimple.

Connections of those horses would no doubt be encouraged by such performances from a Dester Singapore Gold Cup (2000m) (on November 10) perspective, just like Elite Quarteto (Michael Rodd), even if he looked rather dour inside the last furlong after sneaking up on the rails at one stage.

As Baertschiger had also always pencilled in the time-honoured handicap race as I’m Incredible’s ultimate goal, Sunday’s feat must have fuelled such designs further.

“When I told the owners, I would run the horse in the Committee’s Prize, they thought I was crazy,” said Baertschiger.

“There aren’t a lot of horses on 69 points who run in a Group race, let alone win. But when you look at the field, the other horses may be higher rated than him, but they were beatable.

“Elite Excalibur would have been harder to beat if he had run, but he was scratched. The race then became more open.

“Harry also rode him a treat, he didn’t panic and waited when the mare opened up. I was laughing as my horse had a lightweight, and I knew he has a good turn of foot.

“I think that horse can improve further. It’s only his second-up run, the Gold Cup is his goal and I will probably look at the (Group 3) El Dorado Classic (2000m on September 20), which is a handicap race, as his next target.

“It’s good to see Desmond win his first Group race. He and his dad have been with me for a long time.

“My dad won the first Committee’s Prize 19 years ago and it’s a big thrill to win the same race today, not quite in the same silks, but in the same pink and red colours!”

A lawyer by profession, Ong is also well known in sporting circles as the chairman of S-League football team Tampines Rovers. He has raced horses with Baertschiger since the days of Black Jack under the Anfield Stable.

Another person who was also happy to keep facts and figures on the right side of the ledger for his own personal records was A’Isisuhairi.

“Since I’ve been riding here in the last seven years, I’ve always won a Group race. I haven’t won any this year until today, and I’m so happy I made it,” said the ecstatic Malaysian jockey.

“Thanks to Shane for putting me on his lightweight horses. I really wanted to ride this horse as I knew he was going to do well over this distance.

“In the race, he was always travelling nice and steady. I just left him alone, let him run relaxed.

“The other mare was going too hard. I was telling Shafrizal to hold his spot there, nice and easy, it was just nice for us.

“I didn’t want to use him up, I just wanted to save him up for that last run. I saw him win with (Vlad) Duric at his last start, and I know he has a really good finish.

I’m Incredible has now brought up a record of four wins and one second from eight starts for stakes earnings in excess of $160,000 for Ong’s Doha Stable.

Ironclad to make amends in KL