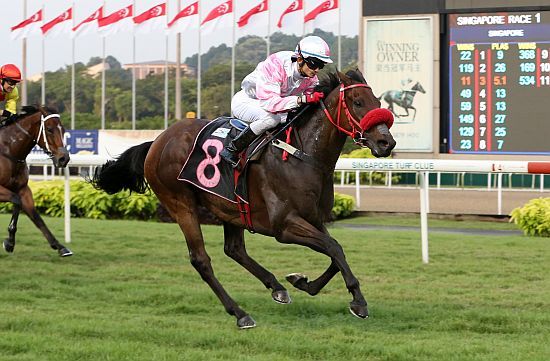 via Michael Lee, Singapore Turf Club
16/08/2019
Comeback jockey Joseph See was a picture of sheer joy and relief after he booted home his first winner since returning from what most had thought was a point of no return.

See copped a second lengthy one-year ban for a handling charge (first one was a similar one-year disqualification aboard Look At Me in 2012) aboard a horse called Perfect Challenger in a race in November 2015.

No jockey usually gets a third chance from the purgatory after two strikes out, but See somehow managed to get relicensed on April 16.

The wait on the sidelines doing odd jobs and just working as track rider for trainer John O’Hara, had been long, but the father of two could finally turn over a new leaf and start afresh when the Singapore Turf Club licensing committee gave him the unexpected second, or should we say third lease of life.

He, however, had to wait a little longer – four months and after 64 rides to finally come full circle. Basilisk in Friday’s opener, the $30,000 Class 5 Division 1 race over 1400m was the horse who delivered that much-needed fillip since his last winner, Perfect Challenger (yes, the same horse who brought his undoing) on January 29, 2016.

See was shaking with emotion as he led Basilisk ($23) into a place that he had almost forgotten what it looked like – the winner’s box, with that old familiar sound of applause and cheering punters in the background.

“I went out tonight on that horse with a heavy heart as I knew he had a good chance, and I didn’t want to lose again. I was feeling a bit discouraged, but I was still hopeful.

“I rode this horse at his last start and he ran on quite well (fifth to Leo). I galloped him over the week and Leslie (Khoo) put me back on.

“I knew he had a chance when he overtook Noh’s (Senari) horse (Born To Win) at the top of the straight. I gave him a tap, I knew he had a second burst and he won well.

“Big thanks to the Singapore Turf Club for giving me a third chance, and my boss John O’Hara for helping me and having faith in me.

“Hopefully, now that I’ve broken the duck, more winners will come my way.”

Khoo was also delighted he was the one to have provided See with that liberating first win back.

“It’s good for Joe. He rode the horse well at his last start and I have put him back on,” said the Singaporean trainer, who was himself a top jockey in the 80s.

“I told him to settle him midfield and let him finish off in the straight. The 1400m suited him better than the 1100m of his last run.”

A five-year-old by Battle Paint, Basilisk was bringing up his second win in 24 starts for prizemoney that has now hit just a tick under the $120,000 mark for his owner Tan Le En.