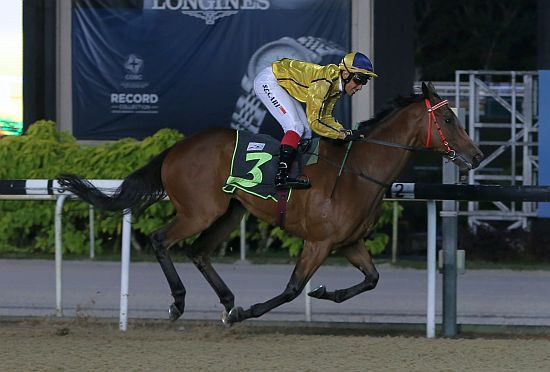 via Michael Lee, Singapore Turf Club
16/08/2019
Trainer Desmond Koh had a spring back in his step on Friday night, and a wide smile, of course.

A double is always a welcomed result for any trainer, more so when it’s a two-from-two, but the Singaporean handler was hoping the perfect score signalled something more significant – a turnaround in his fortunes.

It had not been all beer and skittles for Koh this year. Besides a low win count – only five before August – and a lowly 24th spot on the log, runners had been scarce as well.

Coming Through (Noh Senari) pulls away to an easy win on debut.

But with his loyal band of owners, spearheaded by Macau businessman Cheng Ting Kong of Sun Bloodstock Racing Stable, not to mention his Singapore Derby-winning owner Tan Huat Stable of Chase Me (ridden by the great Joao Moreira for his only Singapore Derby win) fame (2012), Koh has regrouped with the injection of new blood into his string.

The first pin of his brace, Coming Through in the $20,000 Open Maiden race over 1100m is one of those new kids on the block, and aptly-named as well.

Racing in Tan Huat’s famous yellow colours, the El Hermano four-year-old might have been at his Kranji debut, but putting in a professional turn, he gave the legion of backers who took him at his short odds of $9 no anxious moments as soon as Noh Senari sent him forward.

Enjoying a soft lead throughout, Coming Through was off and gone the moment he was stoked up for his run at the top of the straight, going on to score with his head on the chest by three lengths from Golden Kid (Simon Kok Wei Hoong). Star Fiftytwo (John Sundradas) ran third another 1 ¾ lengths away. The winning time was 1min 5.07secs for the 1100m on the Polytrack.

Jockey Wong Chin Chuen – who during his apprenticeship days forged a formidable alliance with Koh– had to flex his muscles a bit more on Koh’s second winner in the $50,000 Class 4 race over 1100m, but still landed the spoils in style, coming from worse than midfield to gun down Justice Light (Joseph See) by one length.

In a reversal of role, given the more awkward alley this time, Lim’s Passion (Benny Woodworth), who won his only race by leading three runs back, steamed home from the rear to run third another 1 ½ lengths away. Northern Sun ($23) clocked the winning time of 1min 5.4secs for the 1100m on the Polytrack.

Koh could not remember the last time he led in a double (it was actually not that long ago, Sun Peeker and Sun Princeps, on April 24, 2018), but he was certainly in a punny mood as he toasted to his success at the Champagne Room.

“I’ve been ‘chasing and chasing’ that win for so long. It’s about time,” said Koh in a subtle nod to his Derby winner.

“It’s been a tough season. Winners have been rare, but I have to thank my owners who have supported me right through, in good times and bad times.

“We’ve had to renew our stock. We have around 10 new horses on board and Coming Through is one of them.

“He came as a three-and-a-half year old, but I’ve given him all the time he needed to mature. I don’t like to rush my horses.

“On his barrier trial form (win with Noh up on July 30), I was expecting a forward run tonight, and he didn’t disappoint. We’ll have to wait and see how he goes at his next starts to have a better idea of his worth.

“As for Northern Sun, he’s been knocking on the door. I’ve been grinding more work into him, and he won a nice race tonight.”