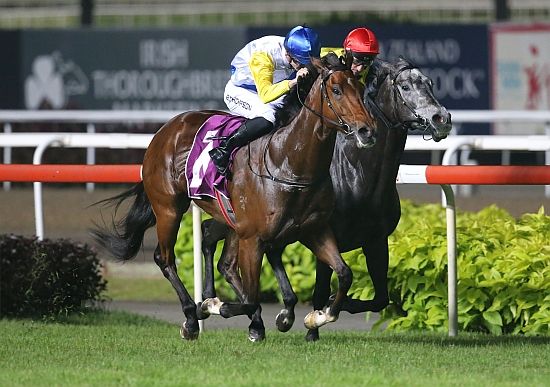 via Michael Lee, Singapore Turf Club
15/08/2019
Trainer Cliff Brown was relatively happy with his two Group 2 Merlion Trophy contenders’ runs in the same barrier trial on Thursday, confirming that both Zac Kasa and Mister Yeoh will press on towards the Polytrack feature.

Whilst Zac Kasa (Michael Rodd) was a lot more forward with a smack-up second place to Bold Thruster (Joseph Azzopardi), who will himself make his racing comeback in the Merlion Trophy, Mister Yeoh (Patrick Moloney) did not look comfortable at the rear before finishing seventh, more than five lengths off the winner.

Formwise, it’s ironically Mister Yeoh (x Wanted) who had actually been going better than Zac Kasa (x Reset) before both five-year-olds were freshened up after their last start in the Group 2 Stewards’ Cup (1600m) on June 30.

Mister Yeoh (Ben Thompson) on the outside defeated Zac Kasa (Glen Boss) in the EW Barker Trophy (1400m) in November.

The Brown duo have actually been regular sparring partners, running against each other in three feature races (the other two are the Group 1 Lion City Cup over 1200m and the Group 3 Rocket Man Sprint over 1200m) at their last prep with Mister Yeoh having the wood on Zac Kasa at all three, albeit not winning any.

In the Stewards’ Cup, Mister Yeoh ran a creditable third to another stablemate, smart mare What’s New while Zac Kasa, who was a bit of a surprise entry, didn’t see out the trip at his first mile test, weakening out to run last after leading.

Brown was not giving Thursday’s barrier trial result too much weight, even if he said Mister Yeoh had a valid excuse for the unplaced run.

“Mister Yeoh didn’t like the kickback, but Zac Kasa went okay,” he said.

“I wouldn’t read too much into it. It’s just a barrier trial and at the same time, Bold Thruster had no blinkers on and Countofmontecristo (third) had an easy trial.”

While Zac Kasa is more of a turf performer as well, the grey did score once on the all-weather while Mister Yeoh is a complete newbie, having raced exclusively on turf at all his 13 starts for four wins, including two at Group 2 level – the second Leg of the Singapore Three-Year-Old Challenge, the Singapore Three-Year-Old Classic (1400m) in April 2019 and the EW Barker Trophy (1400m) last November, a race in which Zac Kasa was a close runner-up.

Brown will in the meantime saddle Elite Quarteto in this Sunday’s $175,000 Group 3 Committee’s Prize (1600m), hoping the Brazilian-bred five-year-old by Rock Of Gibraltar will finally reproduce that touch of class that saw him win a Group 1 race over 2400m back in Brazil when known as Quarteto De Cordas.

“Elite Quarteto is a Gold Cup horse and is looking for more ground, but he has improved,” he said.

“He will run better if it rains. That would be a significant factor as the track’s been too firm for him.”

The Group 1 Dester Singapore Gold Cup (2000m) is the third and last Leg of the Singapore Triple Crown series and will be run on November 10.

“I wasn’t quite happy with Elite Excalibur and decided not to run him,” he said.

Rodd, who usually partners the son of Fastnet Rock unless he’s riding Debt Collector or he cannot make the weight, will team up with Elite Quarteto for the first time.