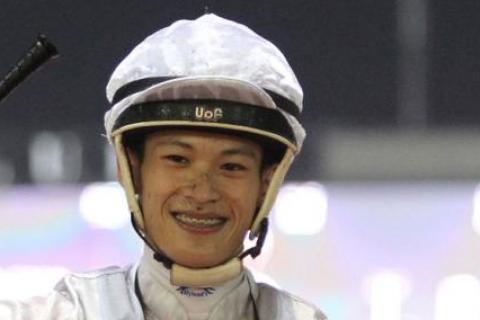 via Michael Lee, Singapore Turf Club
15/08/2019
After Simon Kok Wei Hoong booted home his first riding treble on Sunday, it is hard to imagine the rising star not being crowned Singapore champion apprentice jockey at the end of the year.

Riding on the crest of a wave, Kok is now nine wins clear of the next apprentice jockey Shafrizal Saleh.

There may be still three more months left in the current season, but barring suspensions or injuries, the Ipoh-born youngster, who only had his first race-ride at Kranji last year, is a raging favourite to take over the mantle from last year’s champion, Troy See.

Granted, the task was rendered easier with the graduation of two-time Singapore champion apprentice jockey Wong Chin Chuen in July when he was still on top, but the 3 ½-month headstart Kok’s rivals had on him after he returned from his three-month stint in Tasmania only in April, not to mention a further delay due to an ankle injury sustained there, compounded matters.

Simon Kok is all smiles as he is led back to scales aboard Hugo.

To the 23-year-old Malaysian, it was sheer hunger that drove him to reach his goal – and even exceed it. Kok always believed bridging the gap was not mission impossible, but neither did he think he would be sitting on top of the heap so early.

“I was already late, and I was really disappointed when I broke my ankle and was out for six weeks. But I never thought I could catch up that quick,” said Kok who now boasts 41 winners under his belt, including four in Tasmania.

“I thought it would take a longer time, but it happened sooner than I thought. Since I started the season late, I was even hungrier.

“At my first year, I was still green, and didn’t have much experience. Mr Steven Burridge was my very first supporter, but I’m lucky enough to have good support from other trainers as well this year.

“I ride a lot for my boss, Stephen Gray, Lee Freedman, Cliff Brown, and among the locals, Alwin Tan, KY (Keah Yong) Young support me, too.”

His first hat-trick of wins from My Horse, Dazzle Gold and Hugo on Sunday has certainly gone a long way in giving the equestrian-trained lad a healthy buffer, but Kok is anything but “cocky” or complacent about it.

“Last Sunday, I won my first hat-trick, it was a big thrill,” said Kok.

“I thought I had around three good chances, with Hugo the best. When the other two won as an early bonus, I was more confident on Hugo.

“Things are going well, I’m leading by nine wins, but I have to focus on the next three months. Anything can happen.

“Shafrizal is a good rider and he gets good support from Michael Clements. Syahir (Abdul) and Syafiq (Iskandar Rosman) can also ride and they get good rides, too.

“But I want to win the champion apprentice jockey title, and I’ll do what I can to stay on top.”

Simon Kok looking relaxed at the barrier trials on Thursday.

Kok is aware that life as a jockey is not always a bed of roses, especially come the day he loses his three-kilo claim, but for now, the ambitious young rider is like a sponge absorbing as much as he can.

He attributes his current success to having had a good basic foundation – he started out as a showjumper – and having always strived to gain more skills and knowledge.

“In Tasmania, my coach Mr Stephen Maskiell gave me a lot of advice after a race and how to improve, and thanks to him, I’m a stronger and better rider,” he said.

“I didn’t just learn about riding and the different tracks, but we also learn to talk to trainers and the social side of racing.

“Mr Matthew Pumpa teaches me a lot here, helping not just me, but all the apprentice jockeys.

“I also work a lot on my fitness level. I can’t run after my ankle injury, but I do a lot of exercise a home – a lot of swimming and yoga.

“I also watch many racing videos, not just the local races when doing my form, but also from UK, Australia and New Zealand, just so I can learn from as many riding styles as possible.”

Hard work and self-belief have taken Kok a long way, but the likeable rider remains grounded when asked which horse could take him a few steps closer to his dream of a first title this weekend.

“A few of them are good rides and I think I have some good chances. Fingers crossed, a few can win.”

One of his eight rides on Sunday is Star Emperor, who gave him his first Group win in the Group 3 Jumbo Jet Trophy (1400m) three weeks ago on July 28. The Leticia Dragon-trained son of Red Giant is running in the $175,000 Group 3 Committee’s Prize (1600m), and just like in the Jumbo Jet, Kok cannot claim.

“I haven’t ridden Star Emperor since the Jumbo Jet, but I reckon he’ll still run a good race,” said Kok.

“From barrier No 3, I hope he can get in the right position and finish off. I think he has a good chance.

“It’d be nice to win another Group race.”