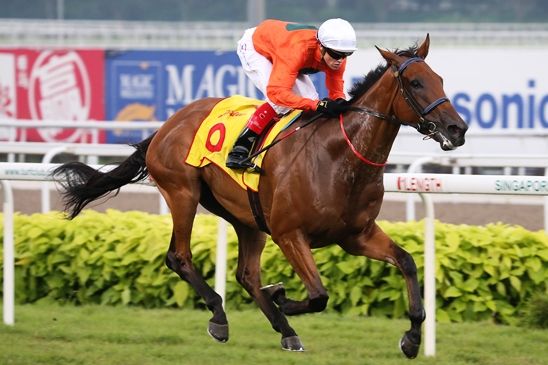 It’s probably because Bahana is such a special horse to trainer Stephen Gray that he is still racing today.

Granted, not in the same heart as on that glorious day in November 2016, but the old boy, now eight, is still sound as a bell.

The son of Elusive City gave the Kiwi handler his first Singapore Gold Cup success in 2016, the first year the sponsorship was taken over by Dester beer from Longines.

Unfortunately, it’s been a long time between drinks since. The Indonesian-owned stayer has not saluted since his Gold Cup triumph under Melbourne champion jockey Craig Williams.

Bahana has come back for two more cracks, nearly pulling off the year-to-year double in 2017 when beaten a nostril by the late Gilt Complex.

He didn’t fire a shot in last year’s renewal of the time-honoured race – running 10th to Elite Invincible, but Gray is undeterred. He is having one more roll of the dice.

The adage that form is temporary, class is permanent must be a mantra of his. Mindful his charge is not getting any younger, Gray has again kept to a lightly-raced programme tailor-made towards the Gold Cup, hopeful the spark was still there.

Listening to Gray talk about the seven-time winner (from only 28 starts), this may well be the swansong campaign of a horse who has taken him to the pinnacle.

Bahana had his comeback race when last in a Class 2 race over 1400m, which was obviously not made to suit. The mile of this Sunday’s $175,000 Group 3 Committee’s Prize is slightly better, but it is more likely another warm-up run en route to his gilt-edged target.

“He will have 52kgs for the first time in a very a long time. The biggest advantage this time is he is getting down in the handicaps,” he said.

“He’s definitely still got a spark in him. Last year, he struggled after he went to Dubai (two unplaced runs in as many starts, beaten a long way), he carried big weights.

“He seems to be going much better this year. He’s still a sound and happy horse, let’s see how he comes up.

“I’m very grateful to his owner Untung (Joesoef). He is a good owner and he knows his horse is very well looked after.

“Anytime the horse tells us his time is up, he is happy to take him to his farm in Indonesia.

“Untung is a gentleman. He said the horse owes him nothing, and gave him so many thrills, but at this stage, he will carry on racing.”

Bahana will be partnered by short-term visiting Victorian jockey Patrick Moloney while Gray also saddles another Singapore Gold Cup hopeful in the Committee’s Prize in Sky Rocket, to be ridden by his apprentice jockey Amirul Ismadi.

The six-year-old four-time winner (1200m to 1600m) by Darci Brahma also ran in last year’s Gold Cup, probably unlucky not to have finished better that seventh after he was hampered by a fallen horse (Noah From Goa) in the home straight. He also returned from a layoff three weeks ago, in the Group 3 Jumbo Jet Trophy (1400m), but ran below expectations to run last to Star Emperor – even if Gray is prepared to forgive that run.

“Forget he went around. He was three wide on a rock-hard track, and was pushed 10 wide around the turn,” he said.

“He couldn’t get in, pulled hard at the back and had no chance. It’s not the first-up run I wanted him to have.

“Joey (Azzopardi) never knocked him around after that. He looked after him.

“That race has brought him on and he worked good this morning. Amirul galloped him and will ride him in the race.

“While I don’t agree with the minimum weight of 50kgs when the weights go up and are compressed down at the other end, it does give lightweight jockeys like Amirul an opportunity to get a good ride.

“Besides, he rides Sky Rocket in work all the time. He is a good rider and deserves the chance.”

Rarely a simple bystander when the Singapore Gold Cup comes around, Gray might have two more bullets come November 10.

“Wecando can gallop, he gets a mile easy. It’s still too early, but hopefully they can get in there.” 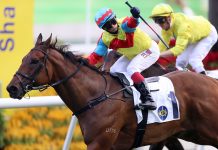