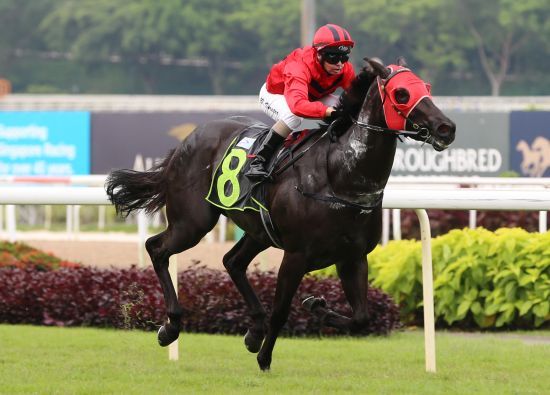 Exciting prospect Bold Thruster pleased connections with his barrier trial on Thursday with another one scheduled ahead of his racing comeback in the Group 2 Merlion Trophy (1200m) on August 25.

Trainer Michael Clements, assistant-trainer Michael White and owner’s representative Jason Goh were on hand to see their recent star stable transfer head out for his first trial under the new handler’s care.

Ridden by Joseph Azzopardi, the bold sprinter quickly speared over from his wide barrier to take the lead within his own steam. In the straight, he just galloped on unextended, with stablemate Real Success (Vlad Duric) keeping him honest as he came upsides.

In the end, Real Success nosed him out on the line with Gold Star (Patrick Moloney) not far away in third place.

Bold Thruster was transferred shortly after his last start when unplaced to then-stablemate Aramco in the Group 1 Lion City Cup (1200m) in May. All-up, the son of Turffontein raced nine times for Shane Baertschiger for six wins (five with Barend Vorster up) and one second, including three Group 3 wins.

Owner Tivic Stable moved the black sensation along with Stay The Course and Royal Pavilion to Clements. Tivic’s owner, businessman Thomas Loke has since added two more horses, Symbol Of Courage and Mercurial Turn, to the yard while he has also sent Mister Dynamo to Leticia Dragon.

“I’m happy with that trial. It was his first and we just let him stride along where he was happy – he also ran good time, around one minute (1min 0.57sec),” said Clements.

“He came back clean-winded and I got good reports from Joe. He’ll probably have another trial the week after and he’ll then head for the Merlion Trophy.”

Whether Azzopardi, the recent Singapore Derby-winning jockey, jumping on him in the trial was a strong pointer for a Merlion Trophy booking remained to be seen, but the Perth rider has certainly done his chances no harm after that first run-out.

“He was a happy horse out there. He felt fresh, but he travelled good and I didn’t knock him around,” said Azzopardi who rides a fair bit for Clements, especially aboard the Falcon Racing horses.

“It was pretty easy and there was plenty left.”

Jason Goh could not complain either with Bold Thruster’s first barrier trial under the new stewardship, even if a win was not really expected.

“It was pretty good, even if I thought he would have a quiet trial today,” said the garment businessman.

“He still did it rather easily. Mike has done a good job with him.”

With five Tivic horses under Clements’ charge, Goh has been at the receiving end of a rising amount of feedback from the Zimbabwean-born handler.

“I’ve met Mr Loke and he’s really passionate about racing. He’s got two new horses with me, Mercurial Turn who is by Written Tycoon and Symbol Of Courage who is by Warhorse,” said Clements.

“Both are getting ready and I hope they go well for Mr Loke.”

Clements also handed a good report card to the actual winner of the barrier trial, Real Success, a Reset four-year-old raced by the Lucky Stable, and who scored second-up in a Class 4 race over 1400m on July 5.

“I was also happy with the other horse, Real Success. He’s a good horse who should have won first-up,” said Clements.

“He’s taken a while to settle in, but we should see more improvement out of him soon.”