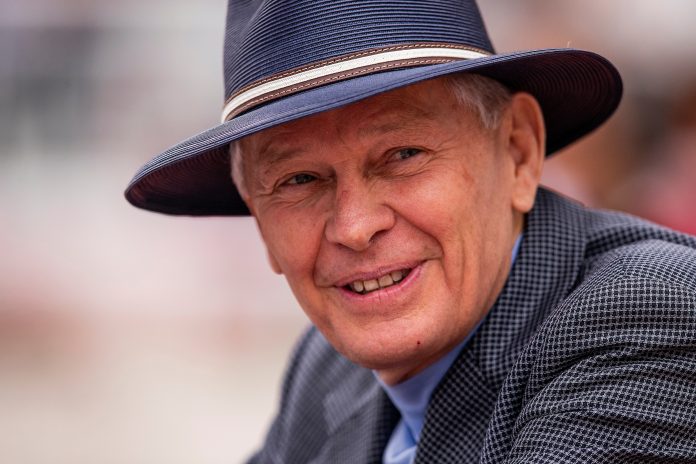 John Moore is in voluble mode, confident in his expressions, bullish in what he sees as the probability that his stable warriors will deliver an eighth champion trainer title.

“I’m really confident. I’m there with all guns firing,” he said at Sha Tin this morning, (Tuesday, 9 July).

Moore heads to Happy Valley on Wednesday (10 July) night having closed the gap to just one win on long-time premiership leader and defending champion John Size: the score stands at 74-73. The penultimate fixture of a hard-fought season promises to be a cracker, with the two greats of Hong Kong’s trainers’ rank locked in a battle that could, as Moore has said, “go right to the wire”.

Moore has five runners on the nine-race card, Size has six. But 19 other trainers, with 97 horses between them, will also be vying for the spoils at the city track. And, again, on Sunday (14 July), the competition will be fierce when the campaign closes out at Sha Tin with 11 races.

The 10-time champion is not one for delivering effusive declarations. In the heat of the fray, he is a cool, measured contrast to Moore’s heart-on-the-sleeve assertions.

“It depends who has the luck to win the races; I don’t think you can define it any other way,” he said.

“I think I’ve done the same thing day in, day out since the first day I arrived here. If I win enough races I win the championship. Sometimes other trainers do much better than me and I’ve just got to cop it.”

Size had to cop it five years ago when Caspar Fownes unleashed a four-timer on the final day to draw level on wins and edge the verdict on second-place countback.

“I’ve been beaten seven times,” Size continued. “I’m not proud of it but if I get beaten eight times, it’s eight. Obviously, I do my best and it must have some importance to me otherwise I wouldn’t try and beat it all the time. It’s nice to win the championship but I’ve lost plenty too and still survived.”

Size’s first title was achieved in his first Hong Kong season. That was back in 2001/02. He rattled off a hat-trick of championships before the first of those seven reversals and has since set a new all-time benchmark of 10 titles. His achievements, like Moore’s, are entrenched in Hong Kong racing lore: both men have built impressive legacies.

The first of Moore’s seven titles was snared in the 1985/86 season. He completed a hat-trick of his own in the early 1990s, which included a tie with David Hill for the 1992/93 championship. Moore knows how to execute a surging late drive: he took the 2010/11 trainers’ title with a last day onslaught, unleashing four winners to pip Tony Cruz by two wins.

“I’m really confident,” he said. “I’ve got five runners on Wednesday night and all of them can win, as far as I’m concerned. They’ve all performed admirably in their previous starts.”

True Grit (131lb) has been a fine servant to Size this season and the four-year-old will attempt to win his fifth race on the bounce in the Class 3 Sweet Orange Handicap (1800m), in which Moore is set to saddle Tashidelek (125lb).

The Size-trained galloper has climbed 27 points in the ratings since a breakthrough win at the Valley in April. His four wins at the track have all been at 1650m but the gelding steps up in trip off the back of a rail-hugging short-head win two weeks ago.

“True Grit is trying to win five in a row and I’ve always found that tough!” Size said. “The horse is fine, his condition seems fine; it’s just that when you aim for five in a row you can’t expect too much. I just hope he runs well and if he has any luck he might win, if not, he won’t.”

The Australian Hall of Famer has two three-year-olds returning to the fray on Wednesday. Tornado Twist was last seen running third at the end of May, while Special Stars was given some downtime after placing fifth on his last start back in early April.

“Tornado Twist has continued to work, he just hasn’t had the racing,” Size said. “He’s a back-marker so he needs a bit of luck because he doesn’t come out of the gates that well.”

Sunny Boy made a belated Hong Kong debut in April and opened his account the following month before finishing a good second last time. He heads to Happy Valley for the first time.

“I bought him as a Class 1 horse to compete at Group level,” Moore said, “but being the big boy he is, we had setbacks in front and behind. It took painstaking time to right the ship but now he’s right. I think he’ll be very hard to beat.”

Special Stars returns for Size in the Class 3 Let Me Fight Handicap (1000m), having failed to make the frame in four starts since a course and distance win in January.

“Special Stars looked a bit tired so I gave him some time off,” the trainer said. “He looks in pretty good condition, it’s just that he’s first-up off a break and these horses have been racing. It’s a 1000-metre race at Happy Valley and they go so quick that probably the horses that have got a race into them have some advantage.”

Zac Purton requires six wins from the final two meetings to match Joao Moreira’s single season record of 170 wins. The champion jockey – fresh off a six-timer on Sunday – has enjoyed a rich partnership with Moore in recent months and the duo will team up with Tashidelek and with Touch Of Luck (131lb) in the Class 4 Maverick Star Handicap (1650m).

“Touch Of Luck will be a force to reckon with,” Moore said. “I think he’s a versatile type – we’ve had him on the turf here and the dirt. I feel that the little bit of cushion at Happy Valley will suit him down to the ground.

“He’s drawn awkwardly in nine on the A track but with Zac on board, who could ask for more?”

Both of Purton’s mounts arrived at Moore’s stable as transfers from rival trainers, two of several the handler has received to bolster his challenge.

“They’ve helped me in the premiership,” he said. “Without those stable transfers I wouldn’t be in the firing line to take on John Size. I do remember when I did win the last premiership (in 2014/15), there were a few stable transfers that season and that did make the difference. These horses changing stables, getting up and winning three or four, like Encouraging has done, that’s a big plus for the premiership.”