Race Summary: EMERALD BAND impressed in his win before a good second in a feature on Met day. He gives away weight on his poly debut but rates a big chance on his class. JUSTAGUYTHING had older runners around him when second on debut over this course and distance and can only improve. NINOTTO was a costly flop on his debut here but may relish the poly. UNCLE FRANK and WALNUT have claims.

Race Summary: DALLAS is overdue and can get it right as his main rivals are young inexperienced sorts that may just need the run. He has gone very close on the poly previously and was not disgraced when switched to turf last time. LIQUIDITY,SUNSET GUN and ITSPRINCEOFPEACE are juveniles that are set to improve. The former has shown good pace but weakens. SUNSET GUN has the best of the draw.

Race Summary: CERSEI improved nicely second time out. She is bred to much appreciate the longer trip but it is her poly debut. She should have every chance from draw one. CENTRE STAGE was 1,40 lengths behind winner ARDENNE when both improved over this trip last time. She receives 3kg and can turn it around. WELAKAPELA can’t be faulted and also gives away weight. CHROME GYPSY is well bred.

Race Summary: ISIKHWAMI SAMI has had wide draws. She has run well whether on turf or poly and now from the best of the barrier draws and with leading rider Anton Marcus up can open her account. MARSANNE is starting a bit late as a three-year-old but trialled well and could be anything on her debut proper. SAUCY BROAD has shown enough to win but has drawn wide. SEEK MOON MAGIC has a say.

Race Summary: HIDDEN INFLUENCE was dropping in distance and still ran well enough to suggest he can win soon. From pole position he should have every chance of notching up win number two. LAUREN OF ROCHELLE has improved beyond all recognition and the time of his last win is good. He could just follow up. TECHNO CAPTAIN can finally win on the poly-his best recent runs were over this trip.

Race Summary: RUNAWAY GAL probably raced too freely on the turf in a feature last time. She loves the poly and looks to have a big chance in this. SWEET MARY LOU carries top weight. She too seems best on the synthetic but runs earlier – check the form of that race. CLASSIC GUARD relished the poly going start to finish and can rise up to this level with a hike in merit ratings.

Race Summary: ROOM AT THE TOP trialled on the poly and showed a liking for the surface. His Cape form is decent and he could be a strong contender given a decent draw today. VINSON won well enough on the turf to suggest he has more to come. He did show up nicely on the poly in his trial. SPACE MERCHANT is holding form and would be deserving. SEATTLE KID and MARCH PREVIEW can earn.

Race Summary: Tough race to end. Lightly raced HOME RULER made progress when tried with blinkers last time. She carries top weight but must be given the utmost respect. GINGER BISCUIT is knocking at the door but has drawn wide along with MISSIBABA who is capable of flying up as well. MISS CALYPSO has been supported recently and could much prefer this trip. More can pop up and upset here. 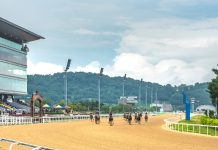