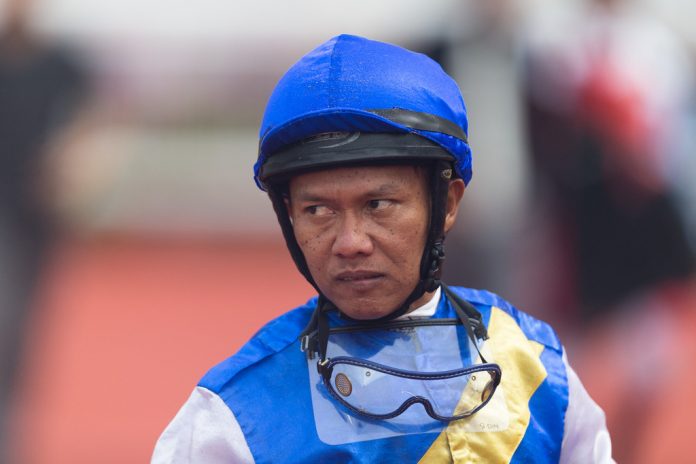 The Inquiry into the run of MR DAVID in Race 3 at the Singapore Turf Club Meeting on Friday, 29 March 2019 was concluded on Thursday, 04 April 2019.  After taking evidence from Jockey I Saifudin (pictured) and Trainer J O’Hara, the Trainer of MR DAVID, and App S Shafrizal, the rider of STORM RYKER, Jockey Saifudin was found guilty of a charge under MRA Rule 44(10)  in that he failed to ride to the satisfaction of the Stewards.

The specifics of the charge being that having drawn a wide barrier, he rode his mount along with the whip in the early stages covering excessive ground to take up a forward position. Instructions that were confirmed by Trainer J O’Hara.

However, from the 1100m to the 800m, he failed to make sufficient effort to steady his mount to afford MR DAVID some respite considering the amount of work his mount had done in the first 500m of the race. Noting the instructions being ‘If you can’t lead to settle handy”.

Then from the 800m, he elected to make another run by pressing forward to cross IRVING LIPSCHITZ (App R Iskandar) near the 700m before his mount commenced to weaken near the 300m.

In all the circumstances with the reasons outlined, he failed to ride MR DAVID to the satisfaction of the Stewards.

When deciding on penalty, the Stewards took into account the nature of the charge, his record, his personal circumstances. Jockey Saifudin was suspended for a period of three months with effect from Saturday, 20 April 2019 to Friday, 19 July 2019 both dates inclusive. He was advised of his Right of Appeal.

This penalty will be served consecutively following the completion of his suspension from Monday, 08 April 2019 to Friday, 19 April 2019 both dates inclusive (three Singapore Race Days).