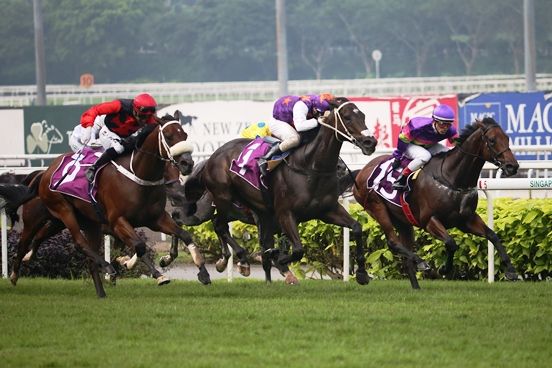 Almost one and a half years after his last Kranji appearance, former champion galloper War Affair makes a racing comeback at his old stomping ground this Sunday.

Back in 2017 when news came through the Ong family was sending him to New Zealand to fix his respiratory issues, some read retirement between the lines.

Either he does not recover and retires, or if he recovers, he races there and retires.

The good news is his wind problems are behind him, and the better news is he is back on our shores!

Though unsuccessful, War Affair, now a rising nine-year-old, lost no marks with a seventh in the Foxbridge and a fourth in the Spring Sprint.

But the way he has held up and thrived since told the Ongs and Marshes only one thing – he deserved one last shot in Singapore.

The 2014 Singapore Horse of the Year came back in December and has been regularly seen on the Kranji training tracks since January.

Whether Marsh can resurrect the dash of old remains to be seen. After all, the 16-time winner and $3 million stakes earner has been struggling to recapture his form leading up to his New Zealand rehab stay at Trelawney Stud, his place of birth.

He hasn’t won since his dead-heat with Storm Troops in the Group 3 Saas Fee Stakes (1400m) in May 2017. Four defeats have ensued, with his last Kranji run yielding a sixth place to Countofmontecristo in the Group 3 Jumbo Jet Trophy (1400m) on September 10, 2017.

But with no signs of relapse as far as his breathing goes, Marsh has decided to have one last throw of the dice for the five-time Group 1 winner – and at the elite level no less.

“We decided to run him first-up this week in this Class 1 race over 1200m to see where we are with him.

“On his work, he’s done everything right.”

With the steadier of 60kgs on his back, the New Zealander is taking no chances by putting his apprentice jockey Zyrul Nor Azman on.

“Zy will ride him. He claims three and that will bring it down to 57kgs,” said Marsh.

“It’s actually Vlad Duric who has been riding him in his work most of the time, but Zy got the ride because of the handicap.

“That race should bring him on further. He won’t run after that until his next target, the Lion City Cup on May 25 – he will head straight into it.”

A few horses have won the Group 1 premier sprint race over 1200m on more than one occasion, with Rocket Man the record holder – four in a row between 2009 and 2012 – but no horse has won the race twice, four years apart. War Affair won the Lion City Cup in 2015 when then prepared by Alwin Tan.

War Affair was previously trained by Mark Walker (mostly as a two-year-old) and Tan under whom he swept the Singapore Three-Year-Old Challenge in 2014, including the Group 1 Singapore Guineas (1600m) as well as four other Group 1s, the Panasonic Kranji Mile (1600m), Raffles Cup (1800m) the same year and the Lion City Cup and Patron’s Bowl (1600m) in 2015.