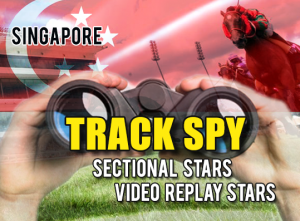 Scored a narrow but impressive last start win in this class when he charged home late from midfield to defeat subsequent winner SUPER DYNASTY by a neck.

Prior to that, he finished third to recent Class 3 winner GINGERELLA in a quality Novice race, so a resultative five-point penalty for his last start win appears hard to prevent him from winning again.

Was taken back from a wide barrier before running on fairly in the straight to finish ninth over an unsuitable distance last time out.

He has slid down the ratings and with the drop in class this week, he looks capable of surprising at value stepping up to 1600m where he is one from two.

Was slow to begin last time out and gave the leader a five-length head start at the home turn before clocking the third fastest final 400m (22.17 sec) to finish third over 1200m. He looks ready to peak third-up and must be rated a winning chance.

An awkward barrier probably ruined his chance of winning in a slowly run race last start, but he still produced a fast finishing effort to check into fourth. He appears well placed in a moderate field to breakthrough this week.