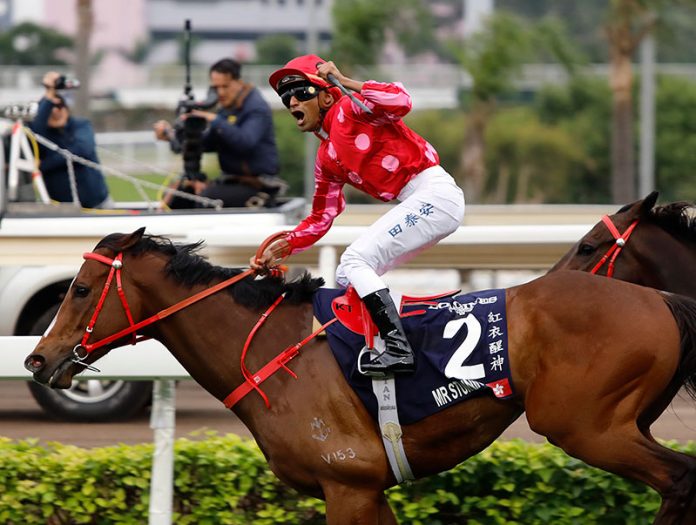 “He’s been off for a month so it was an easy trial to get him going,” Teetan said. “He felt very healthy, he’s in good condition and he looks like he’s holding nice form. Once he gets a few horses around him he can relax and in the straight I just wanted to pull him out a little bit just to keep him calm. He was ready for me to ask him but we’ll save that for later on!”

Trainer Tony Millard is chasing a Dubai invitation for Elusive State and this season’s dirt track revelation had an easy time of things in batch 1 over 1200m. The five-year-old, unbeaten this season, had an easy time of it under Silvestre de Sousa, closing at leisure as he warmed up for a Sha Tin engagement eight days hence.

“I’m happy with him. The idea was to have a nice quiet trial, he’s spot on so it’s a case of keeping him in good health,” De Sousa said.

Caspar Fownes, meanwhile, confirmed that Southern Legend is still on for a tilt at the Dubai Turf at the end of March. The gelding had been due to fly to the UAE yesterday (28 February) but that was shelved after connections decided to go straight to the World Cup fixture rather than also take in the Super Saturday meeting at Meydan on 9 March.

“We decided to go straight to the race at the World Cup meeting, fly him in for that one run like we did when he won the race in Singapore last year,” Fownes said as he watched the stable’s Rise High impress with a purring run from deep in the morning’s second batch (dirt, 1200m).

Saturday’s action starts at 1pm with the Class 4 Changi Handicap (1000m) and concludes with the Class 3 Merlion Handicap (1400m) at 5.45pm, in which the promising talent Right Choice will attempt to take his record to four wins from five starts.